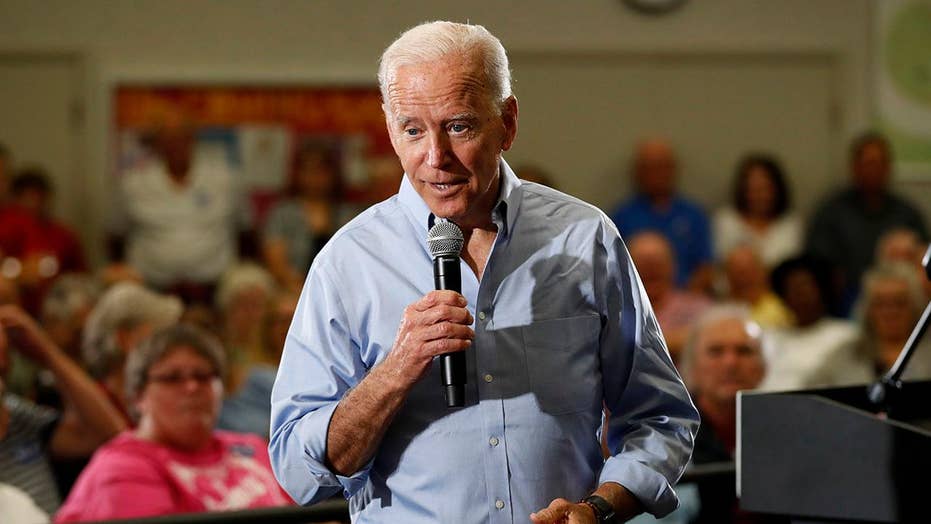 Former Vice President Joe Biden leads the rest of the pack by nearly 20 percent in the latest Fox News Poll.

Former Vice President Joe Biden stands for everything – and yet nothing. His all-consuming ambition is to become president of the United States and he has shown that he will take any position necessary to reach that goal.

Biden has flip-flopped on a multitude of issues as recently as a few days ago, bending like a contortionist with the political winds in a party that is moving ever leftward, fearing he will be left behind if he puts principles over politics.

At age 76, Biden knows 2020 is his last shot at the presidency. He understands that he has to show voters who weren’t even born when he entered the U.S. Senate 46 years ago that he is the right person to deal with 21st-century challenges – a candidate for the future and not the past.

But wanting to achieve a goal too desperately can lead people to take desperate measures. In Biden’s case, he is willing to give up positions he has held for decades to get to the Oval Office. And he is protected by much of the anti-Trump media, which are focused on making Donald Trump a one-term president.

One could almost see a glow emanating from the media attention Biden has received since launching his presidential campaign. But when actually looking at his record, I believe the American people – no matter what their political affiliation – will at minimum be disheartened and in many cases completely rule him out as someone to lead our nation.

This is the third time Biden has mounted a campaign for the White House. His two previous campaigns went nowhere fast. But now – with high name-recognition from his eight years as vice president – Biden has become the clear front-runner in a field of more than 20 Democrats seeking to become their party’s presidential nominee.

However, while everyone knows where Biden stands in the polls, many Americans are unclear where he stands on the issues.

If Joe Biden’s only consistent position is that he will be consistently inconsistent and opportunistic, Democrats have a lot to be concerned about regarding their front-runner.

A prime example came earlier this month. Throughout his decades in politics, Biden supported the Hyde Amendment, a legislative provision barring the use of federal funds to pay for abortions except to save the life of the mother or if her pregnancy is the result of incest or rape.

But on June 6 Biden flipped and took the opposite position, saying he wants to get rid of the Hyde Amendment so that low-income women can get taxpayer-funded abortions.

Because when news stories reported that Biden maintained his position supporting the Hyde Amendment he was sharply criticized by his rivals for the Democratic nomination and by abortion rights groups.

Faced with a choice of following his conscience or pandering for Democratic primary votes, Biden chose to pander.

This level of inconsistency from the front-runner to be the Democratic nominee for president is incredible and frightening, and far from the only concerning aspect of Biden’s candidacy.

In fact, it appears the only thing Biden has been consistent about is plagiarism.

In 1987, faced with evidence he couldn’t refute, Biden admitted that he plagiarized a law review journal for a paper during law school and had to beg the administrators not to be expelled.

Additionally, during his 1988 presidential campaign Biden “borrowed” portions of a speech from Neil Kinnock, a British member of Parliament and Labour Party leader. When the plagiarism came to light, Biden withdrew from the race.

And in his current campaign, Biden unveiled a plan to fight climate change that plagiarized portions of a plan put forward by the BlueGreen Alliance and the Center for Climate and Energy Solutions. Biden said he was innocent of plagiarism in this case, blaming it on his staff.

This trend of plagiarism is extremely disturbing and is just another problematic aspect of Biden that voters will have to contend with as he strives to win the Democratic presidential nomination.

Biden made this abundantly clear in yet another recent flip-flop. During a speech in April, he said he believes China “was not competition” for the U.S. He even mocked the idea that China – with the second-largest economy in the world – could ever overtake the United States economy to become the largest on the planet.

But then after flipping his position on the Hyde Amendment, Biden announced that he would change yet another one of his long-held opinions, telling a crowd in Iowa that  “we are in a competition with China," and “we need to get tough."

If Joe Biden’s only consistent position is that he will be consistently inconsistent and opportunistic, Democrats have a lot to be concerned about regarding their front-runner.

And voters will have to wonder: Would a President Biden hold the same views as candidate Biden? Or would Biden keep flipping and flopping in the White House, making it impossible for voters to know what he would stand for as the leader of our nation?