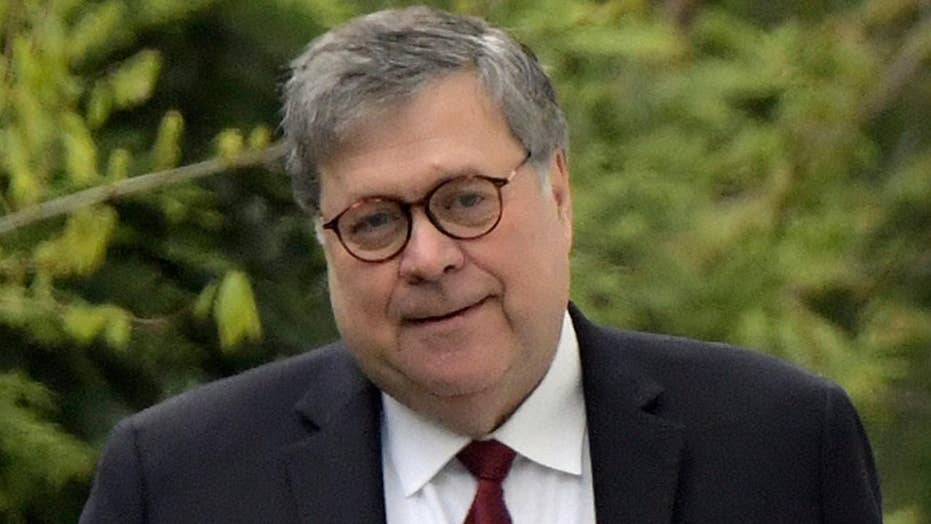 Barr expected to give summary of Mueller report, explain redactions ahead of public release

Former U.S. attorney and Fox News contributor Andrew McCarthy breaks down what to expect from the attorney general's remarks ahead of the release of the redacted Mueller report.

The caterwauling over the press conference called by the Justice Department so Attorney General William Barr can formally announce the release of Special Counsel Robert Mueller’s report is another unabashed demonstration of the real collusion played out over the last three years: the media and the Democrats.

“Extraordinary” is undoubtedly the word that fits the report’s release. “Utterly routine” is just as surely the apt description of the press conference.

The Justice Department always holds press conferences to announce major decisions, particularly about prosecutorial judgments that are being made public. Here, there is patently more reason than usual for a presser.

First, the report involves something that would ordinarily not be made public. When the Justice Department does not charge a person with a crime, guidelines call for prosecutors to remain silent. When the FBI – which serves as our nation’s domestic security service as well as its premier law enforcement organization – has conducted (or is conducting) a counterintelligence investigation of a foreign power, as it has (and is) in connection with Russia’s efforts to meddle in American elections, such matters are classified and not spoken of publicly. Departure from these protocols warrants an explanation from the attorney general.

Second, Mueller’s report is said to be nearly 400 pages in length. Clearly, it will be read closely by the press, legal analysts, Trump administration advisers, members of Congress and their staffs, and some members of the public. The vast majority of Americans, however, will not read the report – certainly not the entire report. That does not mean most of them are indifferent to it as an important news and public policy matter. In such circumstances, it is standard fare for the Justice Department to hold a press conference and issue a press release.

Third, the report has been redacted to account for (a) grand jury material, (b) classified information (particularly about methods and sources of intelligence), (c) the desire not to compromise ongoing investigations, and (d) the privacy interests of peripheral people somehow connected to, but not charged in, the investigation. Obviously, the manner in which those redactions are conveyed in the report is something that needs to be explained. Since the attorney general is ultimately responsible for the redactions, his thinking on the matter ought to be welcome.

Fourth, Special Counsel Mueller did not make one of the main prosecutorial judgments his appointment called for – the decision whether there were legal grounds and sufficient evidence to warrant obstruction of justice charges against the president. Since that conclusion is not part of the report, but Attorney General Barr and Deputy Attorney General Rod Rosenstein have declined to charge based on the report, the press conference is an opportunity to elaborate on the rationale for this decision, aided by the public release of the facts uncovered by the investigation.

Moreover, Attorney General Barr has indicated that he will be directing an investigation that focuses, among other things, on the factual predicate that purportedly justified the Obama administration’s highly unusual decision to use foreign counterintelligence authorities (and other investigative powers) to scrutinize a political campaign – a probe that would not be limited to the FBI and Justice Department decision-making but that would assess the actions of, for instance, other intelligence agencies. (Note that  former CIA director John Brennan’s own account, he played a key role in spurring the investigation. To say the least, it is highly unusual for the CIA to enmesh itself in a U.S. political campaign.)

For these and other reasons, it is palpably proper for the attorney general to call a press conference. In a less politicized media environment, there would be complaints only if such a press conference were not called.

But the media-Democrat complex is in full spleen-venting mode – as if Congress had enacted a law that compels journalists to attend executive branch press conferences.

If they don’t want to go, then don’t go – who cares? Plenty of reporters, fully realizing that the event is routine and that the opportunity to question public officials is what journalists rightly covet, will attend. The public will be informed about the report and other investigative developments – and if what the AG has to say is somehow contradicted by the report (don’t bet on it), that will be news.

The public is also informed by the peevish objections to an event the media exists to cover, about a report the Justice Department’s take on which should be of great interest to congressional Democrats.

This truly is media-Democrat complex collusion. Does anyone doubt that, if Attorney General Eric Holder – instead of, say, stonewalling to the point of being cited for contempt of Congress – had held a press conference about to announce a report on the Fast-and-Furious scandal, the press would have been there with bells on – armed with their Obama administration talking points?

How remarkable to hear Democrats and their media friends – authors of the years-long “collusion with Russia” narrative that is increasingly exposed to be an effort to rationalize Hillary Clinton’s defeat and undermine Donald Trump’s presidency – bleat that it’s the attorney general who is spinning.