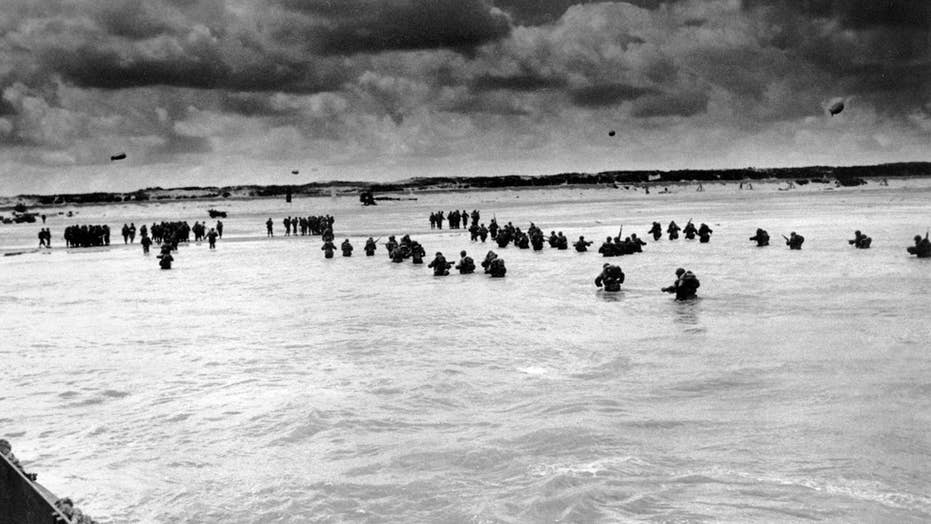 Rarely has a human proposal encompassed such extraordinary implications, nor have so many lives hinged on one divine disposal, than on a June night 75 years ago this week.

It was the eve of D-Day, and a massive armada of ships and planes was fast merging with the darkness of the British Channel, heading for the coast of France. What they found there, and did there, would determine the fate of countless souls, many governments, and the world.

Among those not going with them was the man who sent them. Over the next long, long hours, Dwight D. Eisenhower, supreme commander of the Allied Forces, waited as patiently as he could for the results of months of endless strategic planning and debate. Ultimately, the decision to invade had been his. So was the decision of when to go. He had given the order—and knew now, as keenly as any of those pulling a ripcord or stepping off into the waters off Normandy, that the rest was in the hands of God.

In this June 6, 1944, file photo, U.S. Gen. Dwight D. Eisenhower, left, gives the order of the day to paratroopers in England prior to boarding their planes to participate in the first assault of the Normandy invasion. (U.S. Army Signal Corps via AP)

The general was a well-read man, surrounded by well-read men. It’s interesting to wonder if anyone or anything might have reminded him, in those pre-dawn hours, of John Milton’s famous lines:

Thousands at his bidding speed
And post o'er land and ocean without rest:
They also serve who only stand and wait.

Standing and waiting did not come easily to Eisenhower, but service did. A soldier’s soldier, he’d risen steadily through the ranks to become the unlikely but ideal choice for the most formidable and demanding responsibility ever laid on a military commander’s shoulders. He was commissioned to take back the territories so brutally absorbed by the implacable Nazi war machine, and in so doing to destroy that machine forever.

No man knows the limits of human strength, ingenuity, and ability better than one who is asked to stretch them past the breaking point. Throughout the bloody campaigns in North Africa and Italy, amid daily news of the titanic struggles unfolding in the Pacific, Eisenhower and his team were tasked with calculating the million all-but-incalculable details of an unprecedented invasion, never forgetting—but constantly setting aside—the hundreds of thousands of lives that would be gambled for its success.

The burden was too great not to share. In the years leading up to the war, Eisenhower was not demonstrably a man of prayer or outspoken faith. Yet only a few months earlier, asked by one of his officers to contribute to a book of prayer for servicemen, he quoted from memory an intercession he’d once heard a company commander make on his men’s behalf:

“Almighty God, we are about to be committed to a task from which some of us will not return. We go willingly to this hazardous adventure because we believe that those concepts of human dignity, rights, and justice that Your Son expounded to the world, and which are respected in the government of our beloved country, are in peril of extinction from the earth.

“We are ready to sacrifice ourselves for our country and for our God. We do not ask, individually, for our safe return. But we earnestly pray that you will help each of us to his full duty. Permit none of us to fail a comrade in the fight.

“Above all, sustain us in our conviction in the justice and righteousness of our cause so that we may rise above all terror of the enemy and come to You, if called, in the humble pride of the good soldier and in the certainty of Your infinite mercy. Amen.”

It’s difficult to imagine a major military figure publicly endorsing those unswerving sentiments today. But clearly, they echoed some measure of Eisenhower’s own feelings, as the planes took off and the ships pulled away from the British docks that fateful June night.

In a statement issued to his men before their departure, he closed with a wish for luck and a prayer of his own: “Let us beseech the blessing of Almighty God upon this great and noble undertaking.”

The blessing was granted.

We know now, looking back across three-quarters of a century, what Eisenhower so desperately longed to know, standing and waiting through those dark hours. Those who choose to remember wonder at the courage and the sacrifices. We marvel at the events that unfolded in those crowded hours, and in the weeks and months that followed.

And we pause to give thanks for how miraculously the intricate, sweeping details of the invasion Eisenhower and the Allies proposed were accomplished in the generous grace of a God disposed to bring renewed hope and freedom to a war-ravaged world.

A hope we still nourish. And a freedom of which we, and our children, continue to be the grateful beneficiaries.

Alan Sears, a former federal prosecutor in the Reagan administration, served as president, CEO, and general counsel of Alliance Defending Freedom from 1993 to 2017. He continues to serve as founder. He is the co-author with Craig Osten and Ryan Cole of “The Soul of an American President: The Untold Story of Dwight D. Eisenhower’s Faith,” by Baker Books.
ADVERTISEMENT