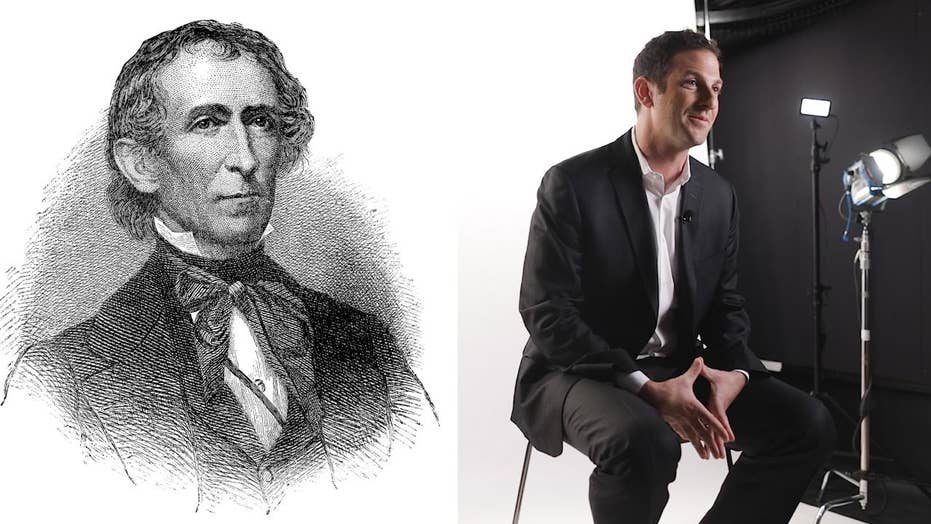 Cohen dives into the mostly unknown (but utterly insane) incident when there was an explosion aboard the USS Princeton during a Potomac River pleasure cruise that killed a half dozen of the most senior members of the Cabinet, and almost killed President John Tyler.

February 28, 1844, was the worst day in presidential history, but it didn’t start out that way.

With a treaty to annex Texas nearly complete, John Tyler, who had become president upon the death of William Henry Harrison, finally had reason to bask in glory. The negotiations had been kept secret and he was gaining confidence about the prospects of winning the 1844 election, which would give him a chance to prove that he was not just an accidental president.

The good news coincided with an unrelated celebration of American naval power, which was to take place on board the USS Princeton. The “gala on the Potomac” as it became known was the most coveted invitation that winter and the nation’s capital had been buzzing for weeks with speculation about who was invited. With wind in his sails and plenty to celebrate, the president looked forward to being the guest of honor.

ACCIDENTAL PRESIDENTS, PART 5: CONSPIRACY, MURDER, AND A NEAR CONSTITUTIONAL CRISIS

The ship was magnificent. It was the American Navy’s “state-of-the-art nautical wonder,” equipped with two 12-inch guns nicknamed the “Oregon” and the “Peacemaker,” each able to fire 225-pound shells up to five miles with a 50-pound powder charge. The twin guns were the largest in the world, and the guests on board would have the opportunity to be the first members of the public to see them in action.

President Tyler had several presidential reasons to celebrate, but he had a more personal conquest that excited him about the journey. David Gardiner, a wealthy former state senator and aristocrat from New York, brought his daughter Julia, whom the widower president had been actively courting since his wife died and Julia was a teenager.

Undeterred by their 30-year age difference, Tyler was determined to make Julia his wife. Her beauty, wealth and connections led to an inundation of suitors, of which the president was just one of many. She was “flattered by the president’s attention,” but it didn’t sway her emotions.

The Princeton began its short journey down the Potomac just after 1 p.m. The sailors had erected a kind of scaffolding for the ladies to stand on, so that the jubilant and already tipsy crowds could cheer the sound of the magnificent gun, which had already been fired twice earlier in the voyage. Meanwhile, the lower deck of the ship was transformed into a salon with the finest wines and refreshments. There was insufficient space for the entire party to eat together, so meals were prepared in two shifts.

As lunch wound down, Captain Stockton received word that the ship was approaching Mount Vernon, the home of America’s first president, and that some of the guests wanted the Peacemaker fired a third time in tribute to the Founding Father. Stockton, who was initially apprehensive about pushing the gun’s limits, agreed when he learned the request came directly from the secretary of the navy.

The smoke was heavy, eventually clearing and revealing the devastating situation. Women’s cocktail dresses were drenched in blood and dismembered body parts scattered across the deck. Top hats and bonnets were blown off and landed in the water, creating confusion about whether some passengers had fallen overboard. Gigantic lumps of wrought iron from the cannon’s port side flew across the deck, creating a blizzard of shrapnel.

One huge piece of iron landed on Secretary of State Abel Upshur’s breast, killing him. The blast also killed Secretary of the Navy Thomas Gilmer. These were the two most important officials in Tyler’s cabinet. They were the architects of both the president’s dreams: the annexation of Texas and the development of a world-class navy.

Virgil Maxcy, the U.S. chargé d’affaires to Belgium, Beverley Kennon, the Navy’s chief of construction, and David Gardiner, the former state senator and millionaire father of Julia Gardiner, were among the other distinguished guests who perished in the blast.

The disaster on board the Princeton killed more top U.S. government officials in a single day than any other tragedy in American history. The twin vacancies left by Upshur and Gilmer’s passing were enough to change the course of history. But what’s more extraordinary is that President Tyler was not among the dead.

By a stroke of luck, William Waller, a young attorney from Williamsburg and the president’s son-in-law, began singing one of the president’s favorite Revolutionary War songs, which caused the president to pause on his way to witness the third and final firing of the Peacemaker. Upon hearing the tune, the president excused himself from the crowd, telling those around him, “When I was a young man that was one of the most popular songs in Virginia – and as I have not heard it for 20 years or more I prefer returning to the cabin and listening to it instead of seeing the gun fired again.”

Tyler was in a joyous mood, singing along with Waller while holding a drink in his hand. Julia Gardiner, who was probably the real reason the president stayed back, was also below deck, although she was busy entertaining the flirtatious advances of John Potter Stockton, the captain’s young son.

Just as Waller reached a critical line in the song, “eight hundred men lay slain,” the Peacemaker was fired on the deck above. The song and the blast were so in sync that those around him rejoiced in cheers. The joy was short-lived.

John Tyler’s brush with death didn’t stop on board the Princeton. Upon hearing the startling news of her father’s death, Julia Gardiner fainted in the president’s arms. As recounted by his grandson, who is still alive 155 years later, “The president took her back downstairs, laid her on a bunk and commanded that the ship go to the shore at the nearest dock.”

Additional medical aid was summoned, and the small steam vessel I. Johnson arrived to help the grief-stricken passengers. Tyler lifted his young crush into his arms and proceeded to carry her down the gangplank from the ship’s deck to the I. Johnson.

It was at this moment that Julia regained consciousness, flailing her arms and legs as she woke up confused and in shock. She was disoriented and unaware of who was carrying her, leading to a frantic panic that nearly knocked them both overboard, which given the ship’s height would have almost certainly killed them both. Such an outcome would have been a tragic irony: She would have been the woman who saved the life of the president by tempting him to stay and have a drink, only to inadvertently kill him an hour later.

Despite the tragedy of the Princeton, the story has one happy ending. The trauma caused Julia Gardiner to have a change of heart. She later recalled, “After I lost my father, I felt differently towards the president. He seemed to fill the place and to be more agreeable in every way than any younger man ever was or could be.”

On June 26, 1844, the president married Julia Gardiner at the Church of the Ascension, on Fifth Avenue in New York City, keeping their nuptials a secret until the following day. The bride was stunning, described by the New York Times as “robed simply in white, with a gauze veil depending from a circlet of white flowers wreathed in her hair.” Her brother walked her down the aisle and gave her away to the president. The Right Reverend Bishop Benjamin Onderdonk (who would later be put on trial for serial groping – the 1840s version of sexual harassment) married the couple in front of a crowd that was “not more than a dozen people.”

At 24, Julia became the youngest first lady in American history, later eclipsed by Francis Folsom, who married President Grover Cleveland at the age of 21. They would go on to have seven children, on top of the seven that Tyler already had living. Tyler fathered his last child at the ripe age of 70 and has two grandsons – Lyon Gardiner Tyler, Jr. (95 years old) and Harrison Ruffin Tyler (91 years old) – who are still alive. They are the closest living links to this chapter of history.