At the heart of the abortion debate, the most heated issue in America, lay two distinct camps. Both show up to state capitols, city halls, and the steps of the Supreme Court. Both interact with legislators, trying to sway them one way or another, and both have a strong social media game. The similarities, however, end there. As anyone who has been to both a pro-life event and a pro-choice event can attest, there is a stark difference in tactic. Simply put, abortion supporters are bullies. And no one likes a bully.

Accounts of violence from abortion supporters directed at pro-lifers are legion, with a heavy share of them taking place recently as tensions rise with the impending likely reversal of Roe v. Wade. In fact, the Department of Homeland Security soberly notes that violence is expected to "persist and may increase."

Pro-choice activists rally at the Washington Monument before a march to the Supreme Court in Washington, May 14, 2022. (Jose Luis Magana/AFP via Getty Images)

Just a few weeks ago, pro-abortion organizers held a "Defend Roe Emergency Rally" in Indianapolis, and Students for Life of America staffer Mary Carmen Zakrajsek was physically attacked by a BLM spokesperson.

During the confirmation hearings for Justice Amy Coney Barrett, an abortion supporter hit a pro-life woman in the face during a conversation outside the Court. An abortion group called "Jane’s Revenge" is taking credit for firebombing a pro-life office in Wisconsin and released a letter threatening further terrorism towards pro-lifers. The militarism has meant that, for the first time, mainstream pro-life groups are being forced to make arrangements for professional security when attending formerly peaceful pro-abortion events. 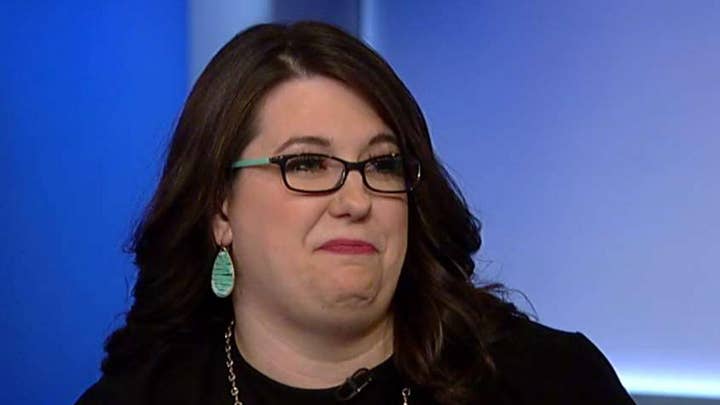 Beyond bad behavior, even the handmade signs utilized by the two sides are a stark contrast. At an abortion rally, you’re liable to see "I eat kids for lunch," a lewd drawing, "Hoes before embryos," "Abort [whoever the sign-holder is mad at]," or a simple "Go f--- yourself" scrawled on a scrap of cardboard. Compare this carnage and vulgarity with what you find at an anti-abortion event, where common messages for signs are "Love them both," "A person’s a person no matter how small," "Help her be brave," and "Women deserve better."

This aggressive culture didn’t appear out of thin air. Over time, advocacy for abortion violence has carried over into the style of advocacy itself – but it doesn’t help that leaders in the abortion movement actively encourage the violence.

The Women’s March, which has become a leader in abortion messaging and mobilization, tweeted on May 14th that they plan to ring lead a "Summer of Rage." House Minority Leader Chuck Schumer gave a speech to abortion supporters in the midst of a Supreme Court abortion case out of Louisiana wherein he appeared to threaten Justices who voted in favor, noting they would "pay the price" and "wouldn’t know what hit them." Many likely also recall Maxine Waters's call for public aggression against Trump officials several years ago, a call which is now being re-purposed by the abortion terrorist group that firebombs pro-life offices.  And Planned Parenthood’s President Alexis McGill Johnson said "we are going to continue to capture that rage."

With that kind of leadership, it’s not surprising that someone spray-painted on a firebombed office of a pro-life organization "if abortions aren’t safe, then you aren’t either."

Historically speaking, an uptick in violence perpetrated by the "losing side" of a civil or human rights battle is an observable trend.

Pro-choice advocates gather outside the state Capitol on April 5, 2022, in Oklahoma City, to protest several pro-life bills being considered by the GOP-led legislature. (AP Photo/Sean Murphy)

In the 72 years of the women’s suffrage movement, notable violence did not occur towards the suffragists until near the end of their hard-fought battle when 33 women were imprisoned, beaten, and force-fed. The turning point of emancipation of enslaved African Americans was met with extreme violence from pro-slavery Americans – not to mention the literal war that preceded Lincoln’s Emancipation Proclamation.

As I’ve written before, "Psychologists say that in abusive relationships, psychopathic partners turn violent once all their other attempts to control the other person have failed. This is an apt analogy for the abortion industry’s current relationship with America. As the nation moves beyond its violent and abusive past of abortion, we are seeing the abortion industry resort to rage, the only tool of control it has left in its arsenal."

Tensions are highest when an intense battle approaches its end.

Hopefully, for the safety of all involved, violence from abortion supporters peak with Roe’s reversal. In America, civil rights movements that adopt peaceful methods have always come out on top, leaving no mystery as to why the modern pro-life movement looks to Dr. Martin Luther King, Jr., William Wilberforce, the early suffragists, and more for inspiration. In the end, history will be the great judge.