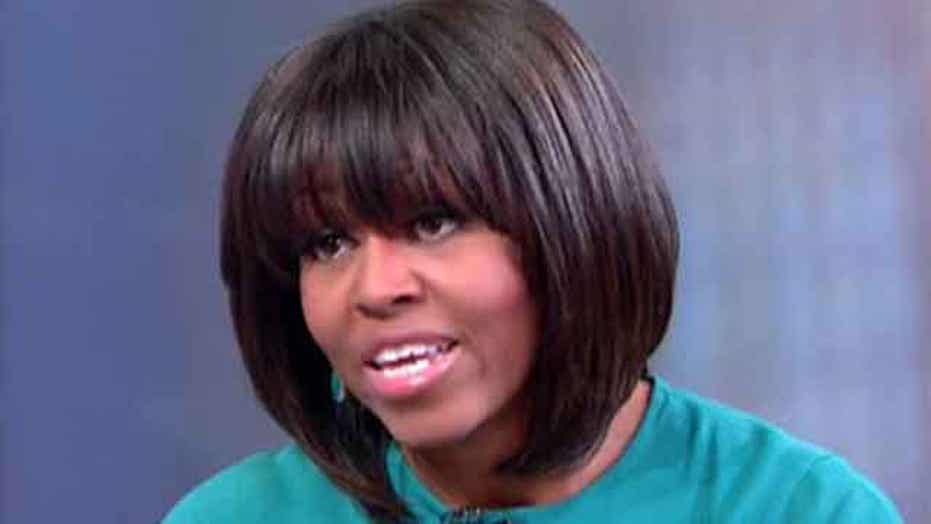 Tuesday ABC's "Good Morning America" edited out an inaccurate assertion by First Lady Michelle Obama that the gunman in a Chicago killing used an "automatic weapon."

Regarding the death of teenager Hadiya Pendelton, Mrs. Obama asserted, "And she was caught in the line of fire because some kids had some automatic weapons they didn't need." This quote appeared online, but not in the February 26 interview with Robin Roberts that aired on the network.

The Chicago Tribune explained, "...a day after her homicide on Jan. 29, Chicago police Superintendent Garry McCarthy said the gunman possibly used a revolver because no bullet casings were found at the shooting scene — as there would be if a semi-automatic or automatic weapon had been used."

No ABC show on Tuesday or Wednesday offered an explanation as to why the network helpfully covered up for the first lady's error.

On "World News," a snippet of the interview was played, but only Mrs. Obama talking about when her teenage daughters might start dating.

On Wednesday, GMA made no mention of the controversy.

ABC did offer a statement to the website Mediaite: "The full story was posted to our website in advance of the interview being broadcast. The edits made to Robin’s interview with the First Lady were made 'solely for time.'"

Such a statement laughably ignores the fact that GMA featured the first lady for two segments totaling eight and a half minutes. The second segment featured Mrs. Obama cooking. Yet, it was the seven (or so) seconds in which the first lady made a newsworthy gaffe that had to go?

The transcript of the interview, which was taped on Friday, February 22, shows that Mrs. Obama said this of Miss Pendleton (italics mine):

"She was standing out in a park with her friends in a neighborhood blocks away from where my kids grew up, where our house is. She had just taken a chemistry test. And she was caught in the line of fire because some kids had some automatic weapons they didn’t need," she said. "I just don’t want to keep disappointing our kids in this country. I want them to know that we put them first."

However, when the interview aired on "Good Morning America" on Tuesday, viewers heard the first lady said this:

"She was absolutely right. She did everything she was supposed to do. She was standing in a park, with her friends, in a neighborhood blocks away from where my kids grew up, where our house is. And she was caught in the line of fire. I just don’t want to keep disappointing our kids in this country. I want them to know that we put them first."

ABC edited the response visually by using a cutaway in the middle of the answer of Ms. Roberts listening.

Instead of at least allowing viewers to see Obama's remarks, the GMA segment that aired focused on hyping her secret appearance at the Oscars as something "straight out of 'Argo.'" The eight and a half minute segment featured no tough questions.

It's not as though Roberts is incapable of asking tough questions when interviewing a first lady. On October 22, 2007, the journalist wondered in an interview with First Lady Laura Bush if the United States should be exporting generosity and not "our bombs."

Scott Whitlock is the senior news analyst for the Media Research Center. You can find him on Twitter @ScottJW.
ADVERTISEMENT