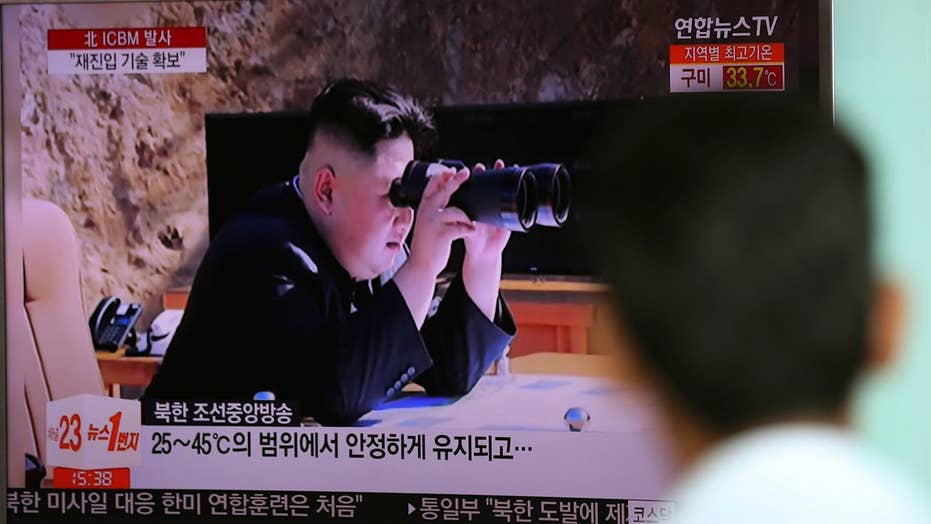 North Korea’s July 4 launch of an intercontinental ballistic missile that could hit American soil has renewed talk of military intervention, with the notion of a surgical strike on Pyongyang’s nuclear arsenal once again gaining resonance. But an effective limited military strike with minimal collateral damage and no escalation simply won’t work.

Despite recent statements by top Trump administration officials, there are no neat or efficient military solutions to the mounting threat posed by the regime of Kim Jong Un. A major stumbling block is that North Korea appears to have dozens of military bases with nuclear weapons and ballistic missiles and we likely don’t know the precise locations of all of them.

A further significant complication is that nearly all of the North Korean bases are at least partly underground and have multiple entrances. Fully neutralizing their weaponry could take weeks of missile and air attacks by the U.S. and South Korea. Some of the facilities may be so deeply submerged that only nuclear force would destroy them.

Even if only one base is struck, the consequences could be catastrophic. North Korea has threatened large-scale retaliation for a single attack and South Korea would bear the brunt of its fury. North Korea has pointed thousands of artillery tubes and rocket launchers at South Korea and has vowed to turn the urbanized areas within range—with more than 20 million residents, including tens of thousands of U.S. citizens—into a “sea of fire.” With its chemical weapons, used with deadly efficiency on Kim’s half-brother Kim Jong-Nam in February, the North could wreak unimaginable death and suffering on its enemies.

The scenario only worsens from there. If North Korea executes even a modest retaliation on South Korea, Seoul would be impelled to fire back, probably escalating the conflict into a major, protracted war that would involve much of the U.S. military. North Korea would likely lose, but not before it inflicts immense damage.

The only thing the Kim regime values so highly is its own survival. The U.S. and South Korea could seek to prod Kim toward nuclear disarmament through intensified information operations targeting the North Korean public, particularly dissatisfied elites.

As U.S. Defense Secretary James Mattis recently warned, North Korean retaliation would spur “probably the worst kind of fighting in most people’s lifetimes.” Such a war is unlikely to end decisively and cleanly. It would probably transition to an insurgency that could exceed the U.S. experience in Iraq.

If the U.S. opts for a military response to North Korea’s mounting aggressions, war would appear inevitable. So far, no American president has been willing to risk that outcome. President Trump, however, has conveyed his dissatisfaction with avoiding military options, tweeting recently that the “era of strategic patience with the North Korea regime has failed.” What steps he may be willing to make are unclear, but two days after Kim’s July 4 fireworks Trump said he was considering “some pretty severe things.”

Left alone, North Korea will probably expand its nuclear force of 10 to 50 weapons today to 100 to 200 in the next decade or so. Simultaneously, North Korea’s ICBM development apparently seeks to decouple U.S. security interests from those of its regional allies, South Korea and Japan. If the North succeeds, at some point it could issue South Korea an ultimatum to “surrender, or else.” The North may see such an approach as its best option for unifying Korea under North Korean control. The U.S. and South Korea should view such a prospect as a disaster, one which can be avoided only by reining in the North Korean nuclear weapon program now. Time is not on our side.

Convincing North Korea not to pursue such developments requires a U.S./South Korean approach in which the costs imposed exceed the benefits that Kim seeks (the essence of deterrence). The only thing the Kim regime values so highly is its own survival. The U.S. and South Korea could seek to prod Kim toward nuclear disarmament through intensified information operations targeting the North Korean public, particularly dissatisfied elites.

From my RAND research, based in part on extensive interviews with senior North Korean defectors, I have reason to hope that the impetus for such change could come from within if prompted and supported by U.S. and South Korean information operations.

Among North Korea’s elite class—high-ranking diplomats, military officers, scientists and wealthy entrepreneurs—many would reportedly like to see Kim gone. These influential Northerners view Kim as a weak and ineffective leader, and those who are already capitalists regard him as a hindrance in their drive for Western-style economic rewards. My discussions with the defectors strongly suggest that many elites believe Kim’s regime will probably collapse in the coming years. Given the right assurances through a robust information campaign, the North Korean elites might be emboldened to pursue regime change.

Defeating decades of North Korean indoctrination is itself a formidable challenge. After seven decades of North-South strife, war could still come. But a growing hunger for change among North Korean elites presents an opening that should not be overlooked. Their changing attitudes could help hasten Kim’s tumble from power and pave the way for a more agreeable government to form. The alternatives are staggeringly grim.