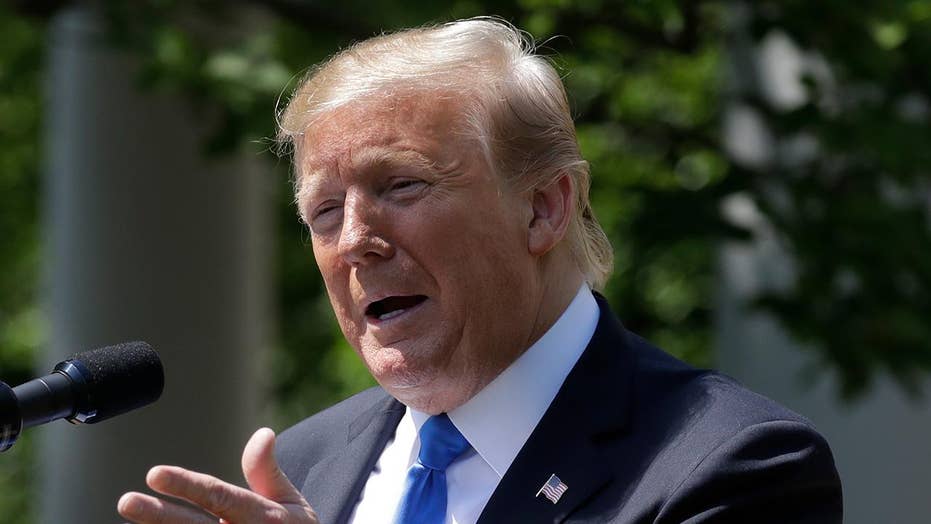 Karl Rove says that there is an ongoing struggle between House committee chairmen and Democratic leadership over whether or not to proceed with impeachment hearings.

President Trump and Attorney General William Barr have clearly committed high crimes and misdemeanors and deserve to be impeached.

The lies these two men have told to the American people and to Congress and their lawbreaking – particularly by Trump, who has run our government like a crime boss for more than two years – give members of the House no choice but to begin impeachment proceedings.

Even Vito Corleone – the fictional mob boss in “The Godfather” films and novel – would balk at the ostentatious display of lawlessness by Trump, who runs the U.S. government like a criminal enterprise for his personal benefit and enrichment.

The House Judiciary Committee could begin contempt proceedings against Barr Wednesday for his action defying a subpoena to turn over Special Counsel Robert Mueller’s full report on the Russia investigation – and for not showing up last week to testify before the committee about his handling of the Mueller report.

And on Monday more than 450 federal prosecutors and Justice Department officials of both parties signed onto a letter asserting that the Mueller report would result in multiple felony charges of obstruction of justice against Trump if he was not the president.

Unfortunately, Republicans are approaching impeachment of the president and attorney general as a partisan issue. They should not.

Trump has broken more precedents and told more lies than we can count with his repeated misconduct.

Just as Republicans turned against President Richard Nixon for his crimes and prompted him to resign in the Watergate scandal, Republicans today should put our country before partisan considerations and join Democrats in impeaching Trump and Barr.

Impeachment would set up trials for both Trump and Barr in the Senate to remove them from office. Admittedly, the odds are high – perhaps insurmountable – against 20 Republicans and all 47 Democrats in the Senate all voting to convict Trump and Barr and force them from office. But justice demands an impeachment effort against the president and his attorney general be launched.

Members of Congress, after all, take an oath to support and defend the Constitution of the United States against all enemies, foreign and domestic. Both Barr and Trump have demonstrated their willingness to – in fact, their insistence on – subverting not just their offices and common decency but the law itself to suit their own ends.

Keep in mind that we would, of course, still have a Republican president if Trump is forced from office. No one would ever accuse Vice President Mike Pence of being a Democrat, and if Trump steps down and we get President Pence no one can doubt Pence would pursue Republican and conservative policies.

And President Pence would, of course, appoint a new Republican conservative to replace Barr as attorney general if Barr is forced from office.

Trump has broken more precedents and told more lies than we can count with his repeated misconduct. Americans are unaccustomed to such brazen flouting of the law, which has become normal behavior for this president. We expect civility and respect for the Constitution, even from presidents we don’t like and didn’t vote for.

Too many of us were caught off guard from Day One by the Trump administration’s outrageous behavior. Our reaction time has been far too slow.

Now, with the release of the redacted Mueller report, we have clear evidence of the demonstrable lies told to Congress and the American people by the president, and actual evidence of his lawbreaking.

But rather than acting as the attorney general of the United States, Barr has acted like Trump’s defense attorney – deciding that the president should not face obstruction charges despite clear evidence in the Mueller report that Trump has obstructed justice.

House Democrats have no excuse not to start the process of impeaching the lawbreakers running our government. There should not be any great debate or internal political or emotional struggle about whether to take this action.

Impeachment of Trump and Barr is necessary lest our democracy be forced to continue to endure the daily peril this White House presents to the American people.

In any other administration, in any other period of American history, any president and attorney who had acted as Trump and Barr have would have written apologetic resignation letters already. The media would be filled with expressions of moral outrage and the normal progression of healing our nation would have begun under a vice president newly elevated to the presidency.

The American taxpayer’s anger would be mollified to some degree by the assurance that our great system worked – that crime doesn’t pay, especially at the highest levels, and that no one is above the law.

Under our Constitution, we are served by a president – not ruled by an emperor or king.

But today, instead of resigning, both Barr and Trump have doubled down on what should be indefensible positions. The news media tilts more toward sensation than investigative journalism. And the American people can barely absorb another crisis, reeling as we are from outrage fatigue and its normalization.

The idea of impeachment is shocking to most Americans – it is an emergency action, to be used only as a last resort. What is even more shocking is that Democrats are being forced to consider this drastic action because all the other safety measures in place to protect our beloved democracy and our Constitution have failed miserably.

In the case of Trump and Barr, impeachment would not be merely a strategic maneuver or a symbolic political tantrum. It would be a valiant attempt to right the ship of state.

Barr is, quite simply, derelict in his duty. His job makes him the chief law enforcement officer in the land and he must enforce the law fairly against whoever violates the law – even the president of the United States.

Checks and balances are built into our Constitution to prevent the exact phenomenon we are witnessing today: one branch of government seizing more power than the others and going rogue.

Under Barr’s leadership, the Justice Department does not enforce the law; it functions as the media manager, defense team and bodyguard of the president. Its legal position that a sitting president cannot be indicted leads to ridiculously circular reasoning: since Trump cannot be charged with a federal crime, no matter what he did, he therefore must be exonerated.

Even a young child can see the logical conclusion – as a practical matter that means the president can commit any federal crime, any time, without consequence – unless he is impeached.

In Trump’s mob-style administration, Cabinet positions are filled not with talent and experience but with loyalists. Barr is the quintessential example of this hiring process. Candidates for powerful government positions are not vetted based on integrity, but on whether they’ll “go to the mattresses” for President Trump.

When President Nixon resigned on Aug. 9, 1974 and was succeeded by Vice President Gerald Ford, the new president famously said: “My fellow Americans, our long national nightmare it over.” We need to hear these words from a new president and from the true statesmen of the U.S. House and Senate.

The House must begin the impeachment process – now.