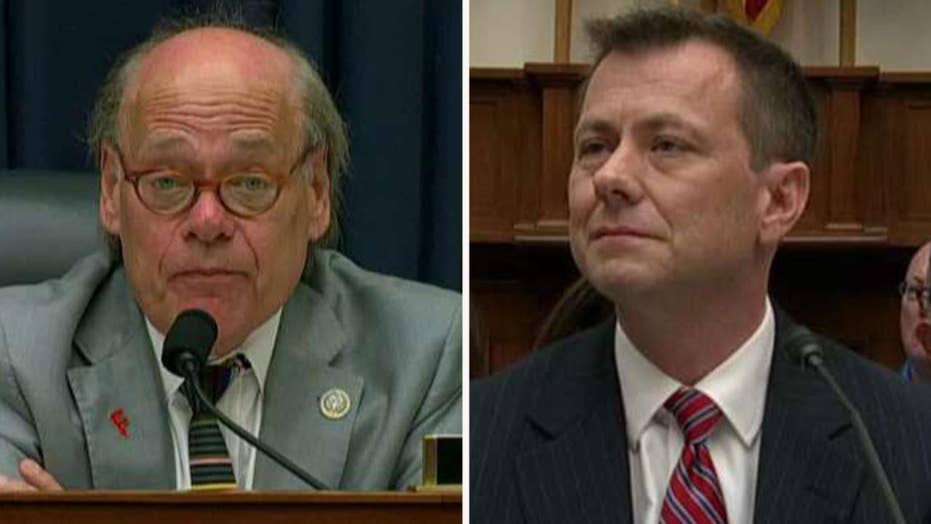 Democratic member of the House Judiciary Committee says Republican attacks on the anti-Trump FBI agent are an attempt to undermine the Russian collusion investigation.

If medals were awarded for disgraceful, disrespectful and downright dumb statements by members of Congress, Rep. Steve Cohen, D-Tenn., would surely be awarded one for his ridiculous comment Thursday to disgraced FBI agent Peter Strzok.

Strzok was questioned by members of two House committees about the clear contempt and hatred for presidential candidate Donald Trump he expressed in numerous text messages with his then-lover and FBI attorney Lisa Page during the 2016 presidential campaign.

These are surely legitimate questions, since Special Counsel Robert Mueller is relying on the work of FBI investigators in his Russia probe.

But Cohen joined other Democrats on the committees in leaping to Strzok’s defense and showering him with praise like he was some great hero, while bemoaning the attacks on him by Republicans.

And then Cohen made his stunning and absurd comment about the questioning Strzok was undergoing.

As an Army Special Forces veteran – and as the son of a soldier who fought in the Vietnam War – I know firsthand that there is near zero tolerance among the military community and most patriotic Americans for any abuse of military awards, symbols or service.

"If I could give you a Purple Heart, I would," Cohen said to Strzok. "This has been an attack on you and a way to attack Mr. Mueller and the investigation that is to get at Russian collusion involved in our election."

The Purple Heart is awarded to members of our armed forces wounded in combat while fighting to keep all of us safe. It was established by Gen. George Washington during the Revolutionary War and represents the respect we offer as a nation for that sacrifice.

To demean this award by using it for any other purpose is wrong. To do so in support of a man who is testifying because he abused the trust of the American people and appears to have used his position at the FBI against a political candidate he opposed is obscene.

Cohen received a torrent of criticism for his abhorrent comment – as he should have. The Nashville Tennessean newspaper reported: “A group of veterans in Memphis has slammed Cohen’s comment Thursday as an ‘insult to every service member’ and are demanding the Memphis Democrat apologize for his ‘disrespectful’ words.”

That and other criticism of Cohen in Tennessee media prompted him to beat a hasty retreat: “I regret mentioning the Purple Heart medal at yesterday’s hearing. My intent was to speak metaphorically to make a broader point about attacks against the FBI and Special Counsel Mueller’s investigation into a Russian attack on our country," Cohen said Friday.

“I have nothing but the highest respect for members of the Armed Forces, especially those who have been awarded Purple Hearts, as well as the hard working men and women at the FBI. We are safe because of their service and sacrifice," Cohen said.

Too bad that Rep. Cohen, who has zero personal experience with the military, didn’t think first before making his comment to Strzok a day earlier.

The Purple Heart is an exceptionally well-known award. Any decent person should have known to steer clear of mentioning it unless referring respectfully to recipients of the medal. To compare the suffering of a heroic member of our military wounded in combat to the experience of Strzok sitting at a table and underdoing questioning by elected officials for his misconduct is unbelievably insulting.

As an Army Special Forces veteran – and as the son of a soldier who fought in the Vietnam War – I know firsthand that there is near zero tolerance among the military community and most patriotic Americans for any abuse of military awards, symbols or service.

While Cohen went further than any of his colleagues in praising Strzok, plenty of his fellow Democrats joined in the lovefest for Strzok.

For example, Rep. Hank Johnson, D-Ga., said we should be "honoring" Strzok.

Far from showing any remorse for personally destroying the FBI’s reputation for trustworthiness and impartiality, Strzok is acting as if he is beyond judgment. At the House hearing he absurdly claimed that he was not biased against Donald Trump and for Hillary Clinton, and took no improper action in his FBI investigations – despite the many biased texts he wrote.

The voluminous record of hate-filled anti-Trump texts Strzok sent his partner in adultery, Lisa Page, tell another tale. They describe a rogue senior FBI official so blinded by partisan political rancor that he has been suspended from his job and may face criminal charges in the future.

As for Rep. Cohen, if a Congressional Medal for Stupidity is ever created, he’s already earned it.