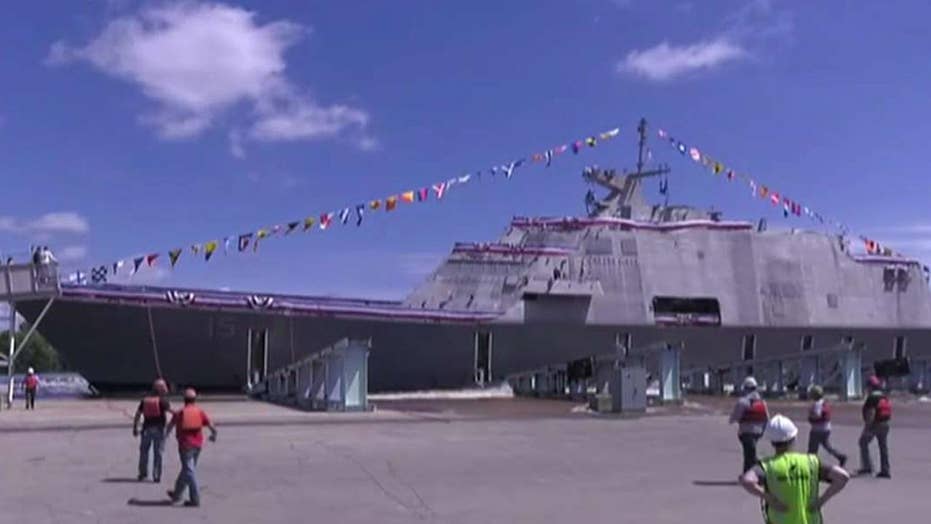 Report: $300 million ship christened with an $8 bottle of wine

“Where are the carriers?”  This is one of the most important questions for a president to ask during a crisis.  The dispatch of an aircraft carrier can often be the military option that our commander-in-chief needs to project force or help quell instability.

Given our Navy’s fleet size, the chances of that question being met with silence are increasing.  But we have an opportunity to reverse the trend, if we act now to restore our naval strength.

As chairmen of the congressional seapower subcommittees that oversee America’s Navy and Marine Corps, we are proposing a way to start: a national policy that codifies the 355-ship requirement in the force structure assessment released by the Navy in December.  We believe that making a national commitment to rebuilding our naval fleet will send a strong signal to the American people, our friends and allies, and our adversaries around the globe.

The Navy needs a minimum of 355 ships, and the fleet currently consists of 276 ships.  Out of that number, only about 100 are deployed. The remainder of the fleet is undergoing maintenance, routine sustainment, or training to deploy.  We must grow the size of the fleet to ensure that an adequate number of ships are present in critical sea lanes and maritime choke points.

China is on track to have twice as many submarines and four times as many small surface ships as the United States by 2030. Russia has doubled its submarine patrols and expanded its operating areas.

Adm. John Richardson, chief of naval operations, described it this way in the Future Navy white paper released last month: “Numbers matter.  The number of ships in the Navy’s fleet determines where we can be, and being there is a key to naval power.”

We cannot expect the Navy to protect maritime traffic, reassure our allies, respond to aggressive rogue nations, and safeguard our national security interests unless we adequately equip our commanders and sailors to do so.  The operational demands are too great and the global threats too complex to shortchange resources or preparation that could ensure military success.

Our naval commanders are helping make the case.  For example, Admiral Harry Harris, commander of Pacific Command, told Congress he has only half the submarines he needs.  Likewise, Admiral Kurt Tidd, commander of Southern Command, reported that not even one Navy ship is permanently assigned to his area of operations.  In early January, the United States did not have a single aircraft carrier deployed anywhere in the world.  Such a stark absence of our most preeminent display of U.S. maritime power had not happened since World War II.

A 355-ship Navy would keep pace with the Navy’s increasing missions and the growing international competition on the seas.  China is on track to have twice as many submarines and four times as many small surface ships as the United States by 2030.  Russia has doubled its submarine patrols and expanded its operating areas.  These strategic build-ups and expansions have the potential to challenge U.S. maritime leadership in critical parts of the world.  A bigger Navy would help secure our interests in this emerging maritime security environment.

Achieving a 355-ship Navy is within reach, if we lay the proper groundwork now.  It is supported by the Future Fleet Architecture studies that were mandated by Congress.  More submarines and surface ships were also a promise of President Trump’s on the campaign trail.

Our shipbuilding industrial base has demonstrated that it can support a greater production capacity, delivering ships on time and within budget.  Better maintenance can help extend the service lives of current ships. In Congress, authorizations that allow for multiyear and block buy contracts can save taxpayer dollars.  A national commitment to shipbuilding can reinvigorate the supplier base – creating jobs across the country – and ultimately help keep costs down.

The strength of our military should not fluctuate according to the ebb and flow of politics.  If Congress intends to fulfill its constitutional obligation to provide for a national defense, then our Navy’s coverage gaps and breadth of operations need to be honestly assessed and addressed.  A national policy that sets a course to achieve 355 ships in the 2020s would create needed certainty and help ensure the continued preeminence of our military forces.  We plan to pursue that policy in both houses of Congress over the coming days, and we hope our colleagues will join in the effort to replace any complacency about our naval strategy with confidence for the future.