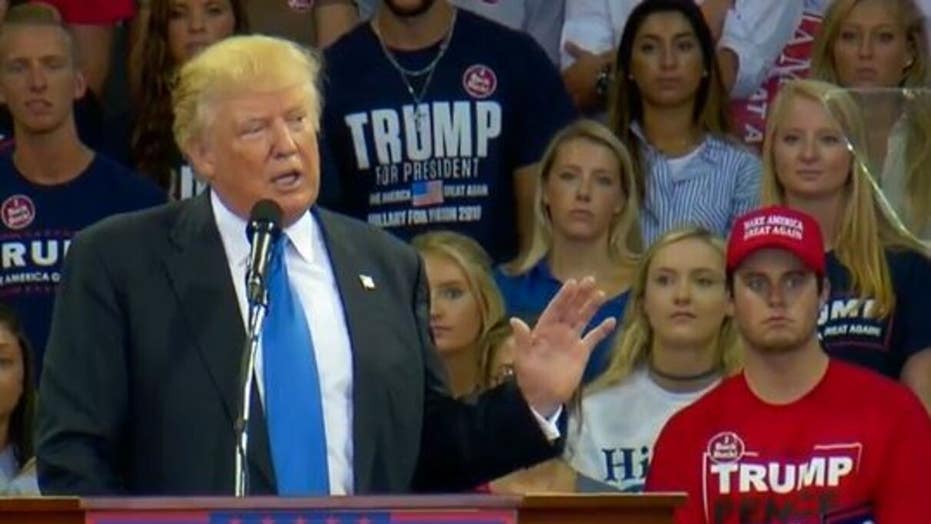 RNC Chairwoman: Enthusiasm for Trump is 'through the roof'

Big Tech has already made its choice for president in November. Social media companies have thrown their support to former Vice President Joe Biden. They are doing it by disallowing President Trump from communicating with the American people.

It is the greatest form of censorship, not to mention election manipulation, this country has ever witnessed.

Twitter, which is used by 83 percent of journalists, recently added so-called “fact-checks” to presidential tweets so that it can further undermine his 81-million follower account. Twitter’s biases are legion. The site is fact-checking the president yet has allowed almost countless examples of foreign propaganda and flat-out lies against the president to flourish.

ADRIANA COHEN: CENSORSHIP BY SOCIAL AND LEGACY MEDIA IS A GRAVE THREAT TO OUR FREEDOM – WE MUST ALL PROTEST

Twitter knows he used their platform to propel his candidacy in 2016. The censors are hell-bent on preventing him from communicating to his base this time around.

Snap, which runs the messaging app Snapchat, has joined with Twitter in the censorship campaign, adding character assassination to the mix. It has declared it “will not amplify voices who incite racial violence and injustice.” The president’s comments will no longer be included in Snapchat’s  "Discover" section, reserved for key content from news outlets and celebrities.

Facebook’s leftist staffers are openly at war with CEO Mark Zuckerberg for not censoring Trump, publicly rebelling by holding a virtual walk-out. According to Protocol, “many employees changed their social media icons to a white fist on a black background,” while others took to Twitter to bash their boss.

Hundreds of employees took part in a live-streamed Q&A session with Zuckerberg, according to The New York Times. As a result, Zuckerberg announced Facebook is “going to review potential options for handling violating or partially-violating content.” So, he might cave, as well.

Shockingly, this isn’t even new for Big Tech firms. Reddit, one of the most popular sites on the internet, has repeatedly restricted conservative content. It even established a “quarantine” of the once-influential subreddit group, The Donald, after leftist complaints.

Wikipedia insists it be considered a nonpartisan platform. Nonsense. It has joined the effort to censor the president. Even Wikipedia founder Larry Sanger acknowledged this. He wrote in May that “Wikipedia no longer has an effective neutrality policy.” Sanger emphasized that, in the case of the online encyclopedia’s entry for Trump, it’s “a joke.”

The leftist censorship effort transcends the political arena. Last year, the knitting site Ravelry banned any pro-Trump commentary for its 8 million users under the “New Policy: Do Not Post In Support of Trump or his Administration."

There are numerous other examples — big and small — of President Trump being censored from the public conversation. And that’s just what we know about. The algorithms, the super-complex computer programs that run the sites, control everything about what everyone can see or post.

And we don’t know a thing about them.

Dr. Robert Epstein has been warning about the dangers of Big Tech for several years. Epstein, a senior researcher at the American Institute for Behavioral Research and Technology and former Editor-in-chief of Psychology Today, wrote an op-ed warning of the danger to the 2020 election back in February.

“President Donald Trump can’t win the 2020 election,” he predicted. In a Feb. 24 op-ed “Why Republicans Can’t Win in 2020,” he explained that Big Tech companies like Google “can shift opinions and votes in numerous ways that people can’t detect,” such as limiting what you see on the first search page.

As Epstein put it, “When it comes to election manipulation, left-leaning American technology companies make the Russians look like rank amateurs.”

With less than five months to go before we vote, social media executives and their radical leftwing staffers couldn’t care less. They are determined to choose the next president – or better put, prevent Trump’s reelection. And if we let them, we’ll never have another free election anywhere.

This year it’s Trump. If they succeed, it’ll be open season on the entire conservative movement.