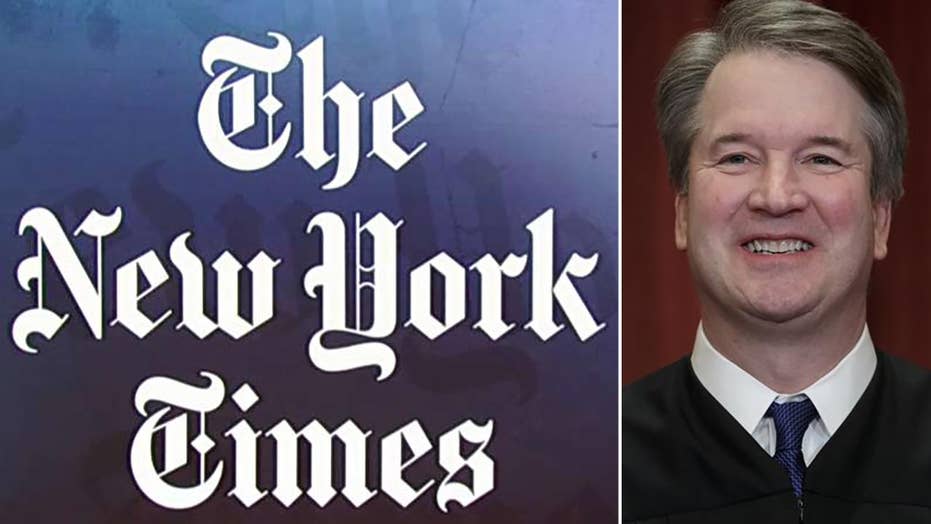 The Washington Post has revealed it passed on a questionable story about Supreme Court Associate Justice Brett Kavanaugh back in 2018 because it "could not independently corroborate the allegation" and key figures didn't cooperate. The story, about a sexual assault allegedly committed by Kavanaugh during the 1983-84 school year at Yale, was published Saturday by The New York Times, which was forced to issue a correction to the article the next day.

The Times revised its report to include a significant detail that several friends of the alleged victim said she did not recall the purported sexual assault in question. The Gray Lady also stated for the first time that the alleged victim refused to be interviewed and has made no comment — but the Post apparently had all of this info well before the Times' gaffe.

“The Washington Post last year confirmed that two intermediaries had relayed such a claim to lawmakers and the FBI. The Post did not publish a story in part because the intermediaries declined to identify the alleged witness and because the woman who was said to be involved declined to comment,” the Post reported on Sunday night.

The Times piece by Robin Pogrebin and Kate Kelly, adapted from their forthcoming book, asserted that a Kavanaugh classmate, Clinton-connected nonprofit CEO Max Stier, "saw Mr. Kavanaugh with his pants down at a different drunken dorm party, where friends pushed his penis into the hand of a female student." The initial Times story resulted in several Democratic presidential candidates calling for Kavanaugh to be impeached despite widespread backlash to the now-revised story.

“Some seized on the fact that the story – labeled a news analysis – did not mention that, according to the book, the woman involved in the alleged incident has told friends she does not recall it,” the Post noted in a piece written by Emily Wax-Thibodeaux, Cat Zakrewski and Robert O’Harrow Jr.

The Post added that it “could not independently corroborate the allegation” published by the Times and quoted a Trump advocacy group leader who called it “unsubstantiated hearsay.”

The update to the Times’ story came only after The Federalist's Mollie Hemingway, who reviewed an advance copy of the book, first flagged the article's omission on Twitter — prompting other commentators to press the issue.

Conservative strategist Chris Barron told Fox News that the Times “has abandoned any pretext of journalistic integrity” and the revised Kavanaugh story is the latest example.

“It is clear that the Times is indistinguishable from dozens of other left-wing blogs. The White House should treat them – The New York Times – the same way they would Vox or Slate,” Barron said.