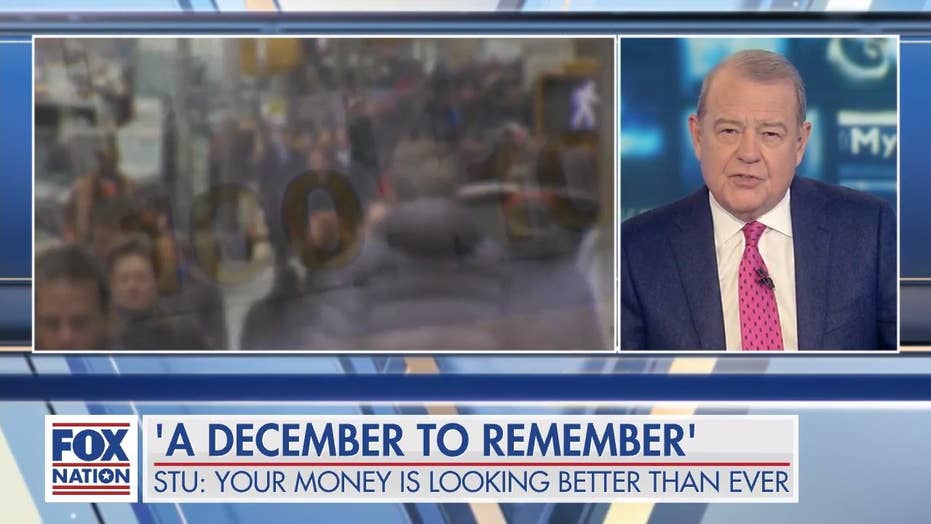 Varney: So far, December is a month for Trump to remember and Democrats to forget

"We're not even halfway through the month, but already this has been a December to remember," said Fox Business host Stuart Varney on the latest edition of Fox Nation's "My Take."

"The month began with a stunning jobs report. It confirmed that America has the best-performing economy in the world. That's quite a statement. But with massive job creation, sharply-rising wages and historically low unemployment, the statement is justified," Varney said as he ticked off some of the biggest news events of the past few weeks.

The U.S. economy added 266,000 jobs in November and the unemployment rate stayed steady at 3.5 percent, according to the Labor Department. The numbers blew away estimates that the U.S. economy would add roughly 180,000 jobs last month.

"Speaker [Nancy] Pelosi called the president a king and vowed to bring him down," Varney continued. "Yes, impeachment is a blockbuster event, but I get the feeling it's turning into a bust. It's totally partisan. The Democrats are split and scared stiff that they'll frighten away moderate voters. For the Democrats, December may turn out to be the month they would rather forget."

The House Judiciary Committee voted Friday along party-lines to send two articles of impeachment to the full House, for an expected vote next week. Democratic House leaders reportedly expect to lose as many as a half-dozen votes from moderate Democrats representing swing districts or those that backed President Trump in 2016.

Looking overseas, Varney argued that the landslide victory of UK Prime Minister Boris Johnson's party over the left-wing Labour party in Parliamentary elections was another good sign for Trump. The Tories won their biggest majority in the lower chamber of Parliament since the days of Margaret Thatcher and Labour turned in its worst showing since the 1930s.

"Another bombshell: Boris [Johnson]. He won big in the U.K. election," Varney said. "He will take the Brits out of the European Union and he really will move toward a big trade deal with President Trump. That's good for America."

Trump sent his well-wishes on Friday to his U.K. counterpart and raised the prospect of a new trade agreement, tweeting: "Congratulations to Boris Johnson on his great WIN! Britain and the United States will now be free to strike a massive new Trade Deal after BREXIT. This deal has the potential to be far bigger and more lucrative than any deal that could be made with the E.U. Celebrate Boris!"

"Even better, he clobbered the socialists," Varney added, in reference to Jeremy Corbyn's party. Political analysts, such as Fox News Digital Politics Editor Chris Stirewalt, argued that American Democrats would be wise to recognize that the far-left proposals of the U.K'.s Labour Party proved to be unacceptable to moderate voters.

Varney also said December has been good for American pocketbooks, which is always a plus for a president running for reelection.

"The market has gone straight up. The value of American business up by a quarter trillion dollars. And that's just from December 1st through December the 12th. That's stunning," he added.