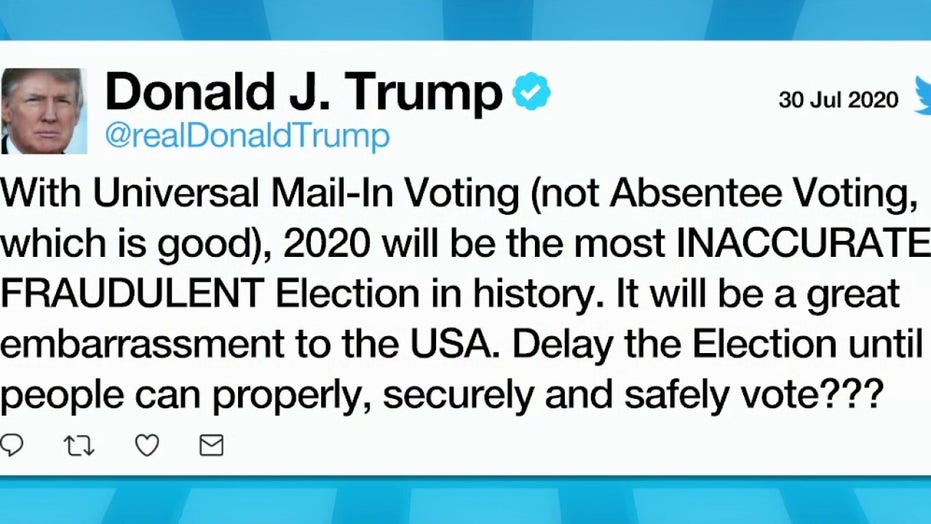 Trump calls to delay 2020 election until people can 'properly, securely and safely vote'

President Trump tweets that mail-in voting would make for the most 'inaccurate and fraudulent election in history'; John Roberts reports from the White House.

The conventional media wisdom is that President Trump was trying to distract from some awful economic news.

Why else, the insta-pundits asked, would he float an idea that he has absolutely no way of making happen?

It’s a wackadoodle notion, to be sure. And a president who was confident about winning a second term has no need to muse about pushing the date beyond Nov. 3.

DEMOCRATS TURN HEARING INTO TRAVESTY IN RUSH TO BASH BARR

Trump used the tweet to push his familiar complaint about mail ballots:

“With Universal Mail-In Voting (not Absentee Voting, which is good), 2020 will be the most INACCURATE & FRAUDULENT Election in history,” Trump wrote on Twitter. “It will be a great embarrassment to the USA. Delay the Election until people can properly, securely and safely vote???”

Let’s assume it was just a coincidence that the tweet was posted 15 minutes after the announcement that the country’s gross domestic product plunged a staggering 33 percent in the second quarter.

And leave aside, for the moment, that a president has no authority to fiddle with the date set by an 1845 law.

Trump knows this, and with even Mitch McConnell saying no way, he knows full well the election won’t be moved. He also knows he is fomenting a media freakout that will amplify his complaints about mail ballots, despite little record of fraud for a method successfully targeted by many Republicans.

Indeed, Trump later told reporters he was trying to push the “very dishonest lamestream media” into talking about the risks of mail-in voting, and that a disputed election could take “years” to resolve. But he got whacked by the Wall Street Journal editorial page and by National Review, which called his suggestion “grotesque and un-American.”

The president isn’t even being consistent here. When Joe Biden said in April he thinks Trump will “try to kick back the election somehow”--which I questioned--the president protested:

“I never even thought of changing the date of the election,” he said. “Why would I do that? November 3rd. It’s a good number. No, I look forward to that election.”

Could Trump be laying the groundwork for explaining away a possible defeat? Maybe.

But I think this is just Trump the disrupter, enjoying the idea of driving everyone nuts and keeping them off balance.

Trump often tweets ideas with question marks, then gradually drops the punctuation, such as when he floated the idea of regulating social media and eventually issued an executive order to push that notion.

But the latest tweet proves yet again that Trump is not a disciplined candidate but one who relies on instinct and provocation.

In the last 10 days, Trump has moved from scripted soberness about the virus to saying much of the country is corona-free and governors must keep reopening their states. After saying on a podcast that he often regrets his tweets and retweets cause the most trouble, Trump retweeted a pro-hydroxychloroquine doctor who talks about demon sex--then said he didn’t know anything about her.

The president’s delay-the-election gambit drew the expected outrage among Democrats. Kamala Harris--is she running for something?--tweeted that “Donald Trump is terrified. He knows he’s going to lose to @JoeBiden. It will require every single one of us to make that happen.”

Election Day will unfold on Nov. 3, as expected. The question is whether Trump can campaign in a way that makes him welcome that date.