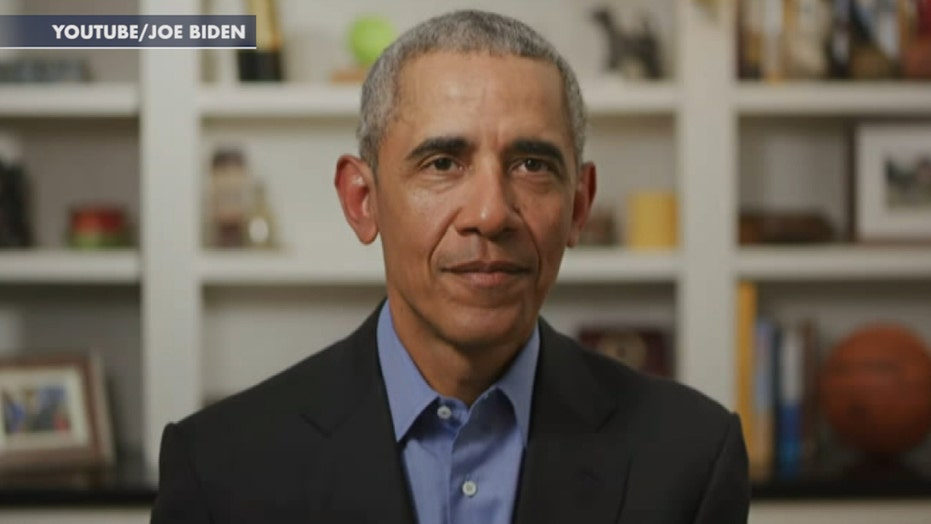 Former President Barak Obama says Democrats need to win the 2020 election to bring an end to the 'vast inequalities' created by the new economy.

Obama endorsed his former running mate after all of Biden's primary rivals withdrew from the presidential race. The widely publicized endorsement has received 10.2 million views since last Tuesday.

The video – which was not produced by the campaign – parodies an Allstate commercial with the insurance company's spokesman Dennis Haysbert watching a basketball game with his friends before a commercial of Haysbert advertising Allstate appears on the screen. In the original ad, Haysbert's friends implore him to change the channel, which he does, only to find another Allstate ad starring himself.

In the video Trump tweeted, Obama's head is obviously superimposed over Haysbert's, and instead of an Allstate commercial, a fake Biden ad appears on the TV when the basketball game goes to commercial.

The ad is fake but it uses a real quote by the former vice president from June 2017 in which he was describing his time as a lifeguard at a Delaware pool when he was younger. The Biden comments were not nefarious and were not the main subject of the speech he was giving, but have been seized on by his opponents previously to illustrate the candidate's gaffe-prone nature.

The video Trump tweeted shows Obama shrugging and saying "what" to the others looking at him just as Haysbert does in the original Allstate commercial.

Obama offered his formal endorsement to the presumptive Democratic nominee one day after Sen. Bernie Sanders, I-Vt., withdrew from the race.

“Choosing Joe to be my vice president was one of the best decisions I ever made, and he became a close friend. And I believe Joe has all the qualities we need in a president right now,” Obama said.

Pointing to the severe challenges the nation faces as it copes with the coronavirus pandemic, the former president said, “Joe has the character and the experience to guide us through one of our darkest times and heal us through a long recovery. And I know he’ll surround himself with good people – experts, scientists, military officials who actually know how to run the government and care about doing a good job running the government."

And Obama stressed that Biden's a stronger presidential contender after surviving a historic primary field that peaked at some 25 White House hopefuls.

“Now Joe will be a better candidate for having run the gauntlet of primaries and caucuses alongside one of the most impressive Democratic fields ever. Each of our candidates were talented and decent, with a track record of accomplishment, smart ideas, and serious visions for the future," the former president noted.