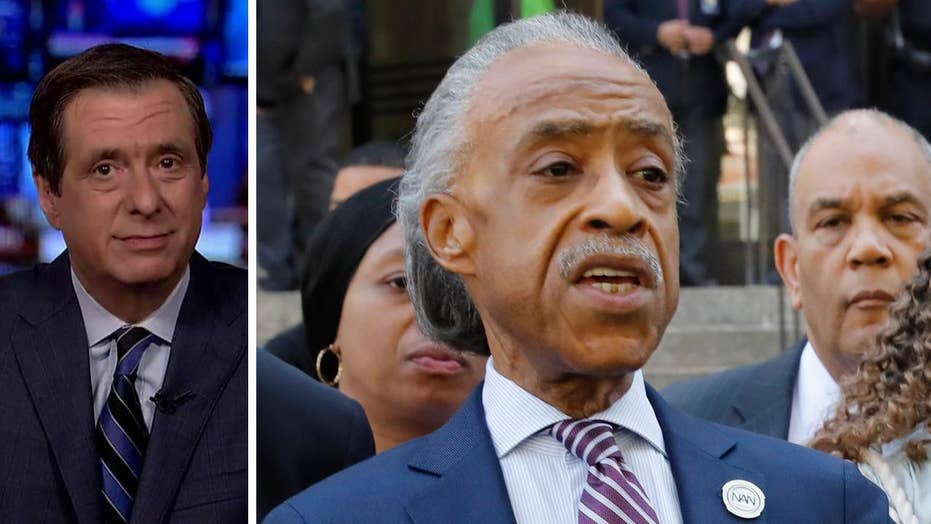 'MediaBuzz' host Howard Kurtz weighs in on why President Trump recently shifted the target of his Twitter fire from Elijah Cummings, to onetime pal Al Sharpton.

Let me just say, based on years of covering the man, that Reverend Al is a much bigger target.

With Sharpton heading to Baltimore yesterday to protest the president’s attacks on Cummings and what he called a “disgusting,” rat-infested city, Trump decided to tee off on his on-again, off-again pal.

And yes, he did it with full knowledge that he was mounting a rhetorical assault against a sixth straight person of color.

Trump wants the MSNBC host to be closely associated in voters’ minds with the Democrats.

Sean Spicer told me on “Media Buzz” that in his denunciations of the four freshman congresswomen, his ex-boss is aiming to make them “the de facto leaders of the Democratic Party.”

One flaw in the attacks on Cummings is that the Baltimore-area congressman, who’s been elected 12 times, doesn’t actually run the city. Baltimore’s horrendous homicide rate and high poverty rate can be more directly blamed on local leadership so corrupt that two of the previous three mayors resigned under a cloud of scandal. We also haven’t heard from another prominent African-American from Baltimore, HUD Secretary Ben Carson.

But Sharpton has a long history of racially inflammatory conduct.

The two New Yorkers have been well acquainted for 25 years, and Trump sometimes showed up at Sharpton’s events. “Went to fights with him & Don King, always got along well,” the president tweeted. “He ‘loved Trump!’ He would ask me for favors often. Al is a con man, a troublemaker, always looking for a score. Just doing his thing. Must have intimidated Comcast/NBC. Hates Whites & Cops!”

The rev fired back: “Trump says I’m a troublemaker & con man. I do make trouble for bigots. If he really thought I was a con man he would want me in his cabinet.”

I don’t think Sharpton hates white people or pressured MSNBC into giving him a show. But he’s played a strange dual role there, such as during the Ferguson furor, when he aligned himself with the family of Michael Brown, led protests when the police officer who fatally shot him was not charged, and then essentially covered himself on his show.

And yesterday, MSNBC was playing clips of Sharpton as he accused Trump of “playing the race card”—a card that the reverend knows quite well.

Simply put, Sharpton has a checkered past as a racial ambulance-chaser. There’s a reason that Ed Koch used to call him “Al Charlatan.”  He’s gradually become more mainstream, especially since running for the Senate and then for president in 2004, but his divisive instincts have never dulled.

I first met Sharpton in the late 1980s when he championed what turned out to be a shameful hoax involving Tawana Brawley, a black teenager in upstate New York who claimed she was gang-raped by six white men. Sharpton never apologized for promoting the fabrication after it was essentially exposed by the New York Times. Sharpton was hit with $65,000 in damages after a local prosecutor he had implicated sued for defamation, yet it was not until a decade later that Sharpton supporters finished paying the damages.

During that same period, Sharpton charged that if the defendants in a racially charged murder case in Bensonhurst, Brooklyn, were acquitted, angry blacks might “burn the city down,” as the New York Post quoted him in a front-page headline.

"We've been the only people over a consistent period of time that could put 1,000 people on the street on a day's notice," Sharpton once told me. "We have a black army we can activate with phone calls."

I once quoted Andrew Cooper, publisher of the black weekly The City Sun, as saying Sharpton was “a hustler” and that “most middle-class black people are embarrassed by him. … Alfred is the perfect black leader for white people because he validates their racism.”

Sharpton even shrugged off revelations that he once worked as an FBI informant and secretly taped conversations with other blacks, allowing prosecutors to install a wiretapped phone in his home.

Sharpton was also charged with—and acquitted of--stealing $250,000 in charitable donations to the National Youth Movement and with evading taxes. But he and his businesses owed millions of dollars in state taxes.

In 1995, Sharpton’s incendiary comments were widely blamed as contributing to the fire-bombing of a Jewish-owned business in Harlem, Freddy’s Fashion Mart, which killed seven people. Sharpton had told a crowd that “we will not stand by and allow them to move this brother so that some white interloper can expand his business on 125th Street.”

All this might now be dismissed as ancient history, except that Sharpton has never renounced his past, especially the Brawley fiasco. And he still has a platform on MSNBC.

If Trump keeps attacking him, stirring new accusations of racism, it will be a colorful battle. But there may be fewer political dividends, since Reverend Al, unlike members of Congress, doesn’t run anything but his mouth.