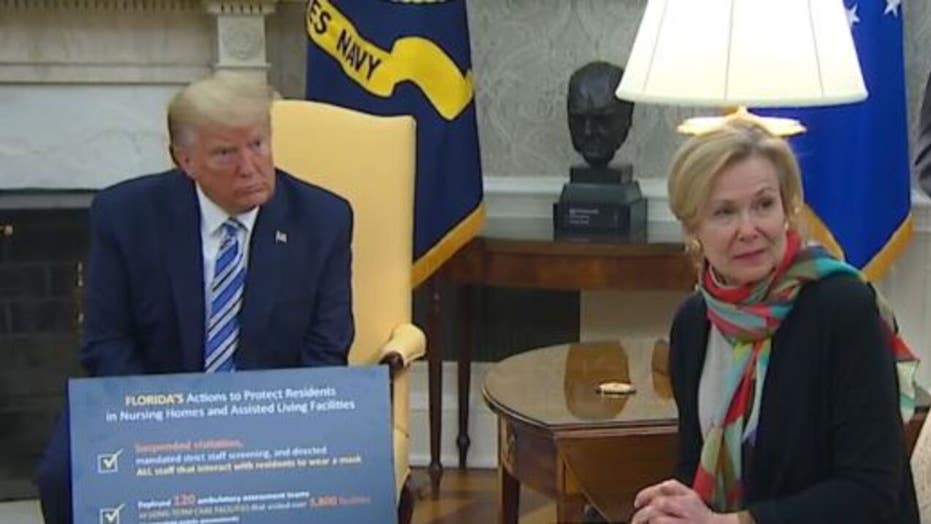 Dr. Birx corrects a Yahoo reporters claim that the U.S. is lagging behind South Korea in coronavirus testing

Ari Fleischer remembers fiddling with the seating chart for the White House press room exactly once, moving Time and Newsweek a few rows back because their reporters rarely showed up.

He also has a photo of him showing George W. Bush a seating chart before an East Room news conference, with reporters from major organizations in the front rows, so the president would have a better sense of who to call on.

But in Bush’s second term, the former press secretary says, the administration relinquished control of the seating, a government prerogative since the Reagan years, to the White House Correspondents Association.

The world will little note nor long remember that a Trump White House aide tried to move CNN’s Kaitlan Collins to the back of the room, and that when she refused the aide threatened to bring in the Secret Service. That seemed petty, but drew added attention because social distancing has slashed the number of reporters allowed in.

“I do think the seating should be up to the government, not the WHCA,” Fleischer told me. “It seems odd to allow for-profit businesses, even ones whose mission is journalism, to make decisions about taxpayer-provided seats."

Which journalists get in, and what they ask, has come into sharp relief during the six weeks of coronavirus briefings--especially since President Trump declared them a “waste of time,” citing relentlessly hostile questions from the correspondents.

One of the president’s problems--which helps explain why some Republican allies have urged him to curtail the pressers--is that he sometimes appears at odds with his own health advisers. That’s why “SNL” tapped Brad Pitt as Anthony Fauci, cheerfully contradicting the boss on just about everything.

But that was a non-issue when Trump canceled the briefings for Saturday, Sunday, Monday and Tuesday, substituting a solo news conference on Monday.

As the New York Times put it: “The lure of cameras in the Rose Garden proved too hard to resist. For a president who relishes the spotlight and spends hours a day watching television, the idea of passing on his daily chance to get his message out turned out to be untenable despite his anger over his coverage.”

The Atlantic depicts Trump as being predominantly concerned with PR:

“Trump has approached the pandemic not as a public-health crisis, nor even, in practical terms, as an economic crisis. Instead, he has treated it as a communications problem that requires a good sales pitch, which he has mostly delivered via the White House briefing room.”

But as the article acknowledges, communicating with an anxious public is a major responsibility during a pandemic. Isn’t that why Andrew Cuomo is drawing so much media praise?

The president took questions yesterday at two events Tuesday. At the first he chastised Yahoo’s Hunter Walker for asking an inaccurate question about testing and South Korea (“Nobody knows who the hell you are”), and at the second one he said it was “very nice” of Walker to have apologized online.

At Monday’s presser, Trump was disciplined rather than going off on reporters whose questions he didn’t like. While he bragged that “I built the greatest economy” only to shut it down, the president was largely restrained in his responses.

Trump might have denounced New York Magazine’s Olivia Nuzzi for asking why he would “deserve to be reelected” after losing more Americans than died during the Vietnam War. (Is every single virus death his fault?) Instead, he said this:

“So, yeah, we've lost a lot of people. But if you look at what original projections were, 2.2 million, we're probably heading to sixty thousand seventy thousands. Far too many. One person is too many for this. Then I think we've made a lot of really good decisions.”

On Sunday’s “Media Buzz,” Fleischer told me that Trump was overexposed from the daily briefings and that the sessions were way too long:

“Standing at that podium for more than 30 minutes is kind of like being in a bar after 2 a.m. All the good stuff has already happened, and the only thing left is probably the bad stuff. So get out of the bar before 2, and get off the podium after 30 minutes.”

The New York Times liked the quote so much that the paper got Fleischer to repeat it almost verbatim for yesterday’s story.

The president, for his part, ended the presser in just under an hour.

Politico has belatedly issued a correction after an egregious error about Donald Trump and the Bank of China.

The website said it is committed to “journalism that gets its facts straight. We regret we fell short in this case.”

Politico made a serious accusation on April 24, under the headline “Trump owes tens of millions to the Bank of China – and the loan is due soon.”

That was flatly untrue.

The piece said the Bank of China was one of several banks that struck a nearly billion-dollar refinancing deal in 2012 with a real estate venture in which the Trump Organization had a substantial minority interest.

The result, Politico claimed, was that Trump’s company owed the state-owned bank tens of millions of dollars on a loan coming due in 2022. That had obvious implications given China’s role in the pandemic and the continuing trade war between the two countries.

On Friday night, the Bank of China told Politico that it had sold off that debt shortly after the 2012 deal, some eight years ago. The Chinese bank also said it had no current financial interest in any Trump property.

Politico modified the story but resisted a formal correction until Monday night.

To say the president’s company owed a huge sum to a foreign-owned bank, when the debt hasn’t existed for eight years, is a major-league error.