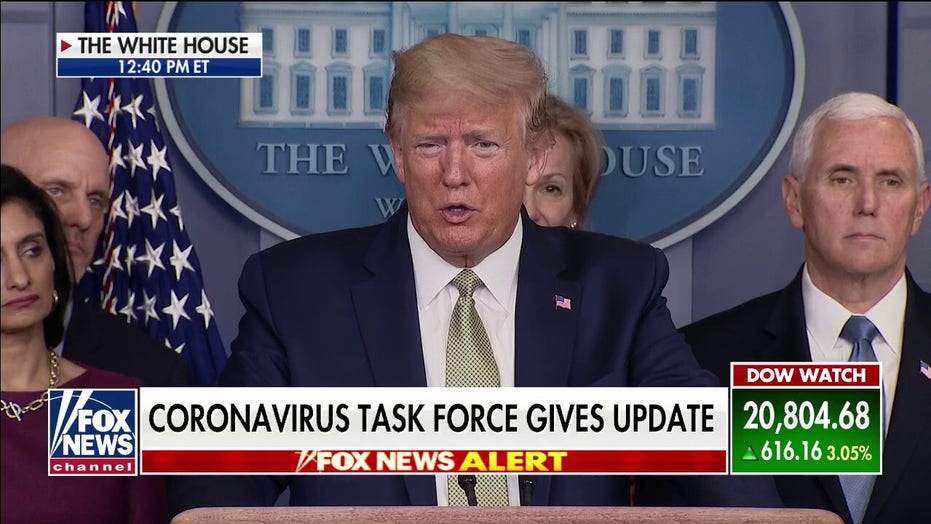 President Trump: China was putting out false info about COVID-19

President Trump address false information put out by China that the U.S. military gave them coronavirus

President Trump blasted the media on Tuesday during a press briefing on the coronavirus but insisted that he only hits the press and Democrats when they don’t play fair.

Trump was asked about his calls to put politics aside and unify the nation as it deals with the growing pandemic and a reporter said his recent rhetoric “lashing out” at Democratic governors doesn’t set an appropriate example.

“I only do that when I have to respond… and I will continue to [criticize Democrats] if they’re not going to play fair, because they have the media on their side, I don’t. I just have me,” Trump said. “They’re not gonna play fair, I’m gonna do that.”

Trump then said “there will be nobody better than Donald Trump, in terms of bipartisanship” if Democrats and the media is truthful.

“If they’re going to say things that are false, like the story that was written yesterday... they taped the conference call that I had with the governors. It was a good call. It was fine. I assumed somebody was going to tape it, they handed it to various people, one of them was The New York Times and The New York Times chose to write totally inaccurately about it,” Trump said. "It was a totally disgraceful thing, it was bad journalism.”

The Times on Monday reported that Trump told governors to they should not wait for the federal government to “fill the growing demand for respirators needed to help people diagnosed with coronavirus” and quoted the president’s comments.

“Respirators, ventilators, all of the equipment — try getting it yourselves,” Trump told the governors during the conference call, according to the Times.

But Trump's comments were said to have been taken out of context by the Times. The president also called the Times a “disgrace” to journalism on Monday night and tweeted a link to a Washington Examiner story that details the Times report he referred to.

“President Trump did not tell the governors they are on their own. He told them they can streamline their respective responses by taking specific actions at the state level. He also made sure to tell them they have the support of the White House,” the Examiner’s Becket Adams wrote, blasting the Times. “It is intentionally false information, disseminated broadly on social media with the explicit intent of misleading people.”

Trump said during Tuesday’s coronavirus press conference that the Times does “a lot of bad journalism” and he will be bipartisan unless attacked like he was by the Gray Lady.

“I’m not going to let them get away with it,” Trump said. "I gave the governors the right to order directly if they want, if they feel that they can do it faster than going through the federal government. Now we've knocked down all of the bureaucracy, it is very direct, but it’s always faster to order directly. I gave them those. That was totally misinterpreted by The New York Times, on purpose, unfortunately.”