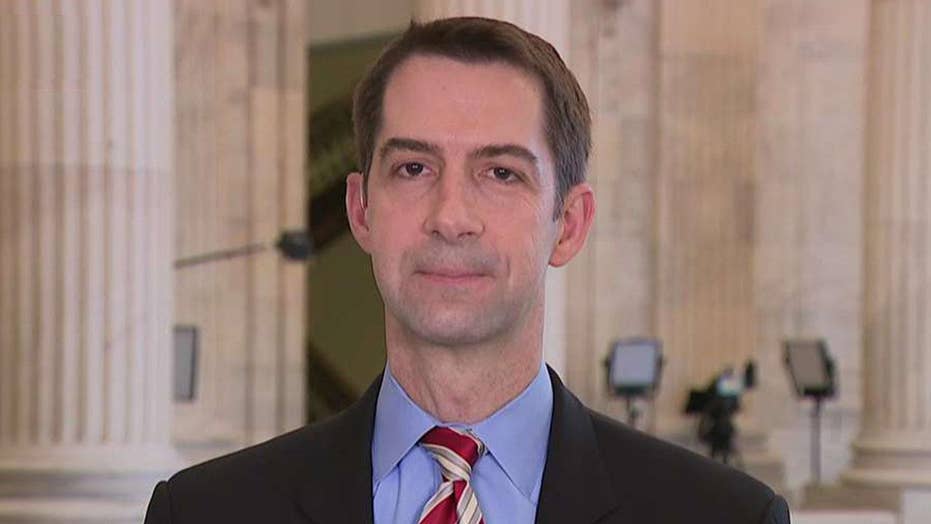 Sen. Tom Cotton, R-Ark., mocked House Speaker Nancy Pelosi, D-Calif., for using commemorative pens with her name inscribed on them to sign a resolution to transmit two articles of impeachment against President Trump to the Senate for trial.

“It’s a very solemn and prayerful moment, guys, when you saw those gold-encrusted commemorative pens that Nancy Pelosi had specially made,” Cotton told “Fox & Friends” with sarcasm.

“You know, we thought that she may have some grand strategy for delaying the impeachment trial for 28 days. Maybe, she was just waiting for her special order pens to come in from the factory,” Cotton joked.

Pelosi drew backlash on Wednesday for the move.

Before the signing Wednesday, aides set out two small trays containing more than two dozen black pens emblazoned with Pelosi's signature. She entered the room and sat at a table with the documents and pens before her. House prosecutors and the committee chairmen who had worked on Trump's impeachment were standing around her. Pelosi picked up each pen, signed a bit, and handed each one to a lawmaker. Sometimes, she was smiling.

The articles were then sent to the Senate for trial, which technically is expected to start Thursday but moves into full swing next week.

Cotton went on to say, “We can laugh at that but I think it speaks to the bigger point about just how partisan the House has acted over the last four months in pursuing the president for at least the third, maybe the fourth time, depending on how you define it, to impeach him, which started the very first day he was sworn into office.”