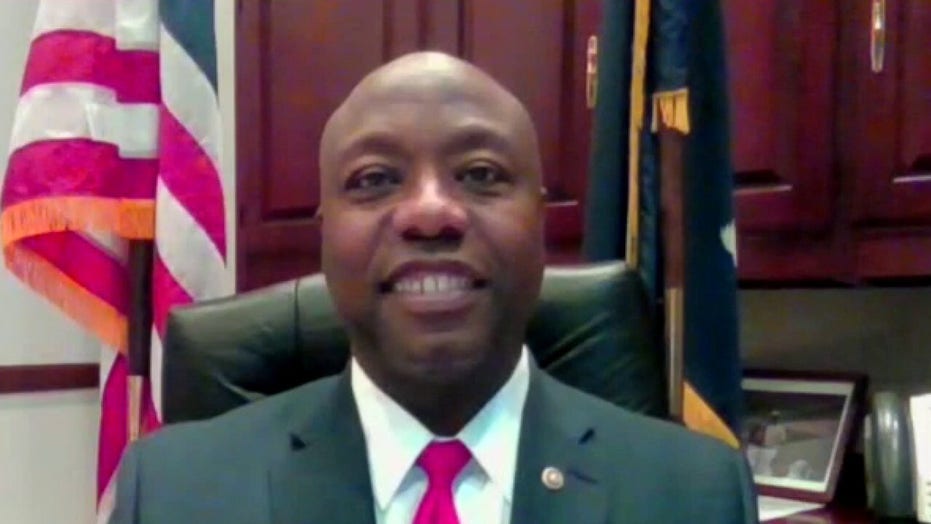 Sen. Tim Scott on battle over police reform in Congress, threatening voicemails received by his office

Sen. Tim Scott, R-S.C., told "The Story" Tuesday that "liberal Democrats" were responsible for the offensive voicemail messages he received at the height of his push for police reform.

Scott, the lone black Republican senator, played the messages for his Republican colleagues during a closed-door lunch last week.

"We had dozens --- more than a dozen of them," Scott told host Martha MacCallum. "I only played two of them, which were the most racially offensive comments from liberals in this country. They called to say that I was in their crosshairs.

"It was so profanity-laced, you can't play five seconds of those videos on your show because there are that many f-bombs, the n-word -- by liberal Democrats -- causing a stir in my office, threatening my life. It is the most audacious, repugnant behavior I've seen in a very long time."

Clyburn, D-S.C., told MacCallum that Scott's frustration over the failure of his bill "ought to be with Mitch McConnell" and added that the majority leader should have let Scott work with Sens. Cory Booker, D-N.J., and Kamala Harris, D-Calif., on bipartisan legislation.

"I had multiple conversations with Democrats, including those two [Booker and Harris], about what they saw that needed to be changed in the bill," Scott told host Martha MacCallum. "Now, I offered them ... 20 amendments to do the changing. They still walked away from the opportunity."

Scott admitted that "I would certainly add to my legislation [a ban on] carotid [chokeholds] ... But if that is our disagreement, that's solved in 30 seconds."

Scott also reacted to a viral video taken last week of a white female protester screaming at a group of police officers. One of the officers, who is white, tells the woman not to address him on the issue because his wife is black, prompting the protester to ask the officer for proof and produce a picture.

"The uneducated are showing up in droves and unfortunately, they're getting microphones because they have been empowered not by the historical perspective, not -- as Congressman Clyburn said -- an assessment and an evaluation based on historical understanding. That's out the window," Scott said.

"It's chaos and chaos leads to anarchy. And that's dangerous, very dangerous for this nation. And we need to force the conversation in the public forum so that adults can have conversations where we agree to disagree without being disagreeable. It can happen. It hasn't happened in too long."