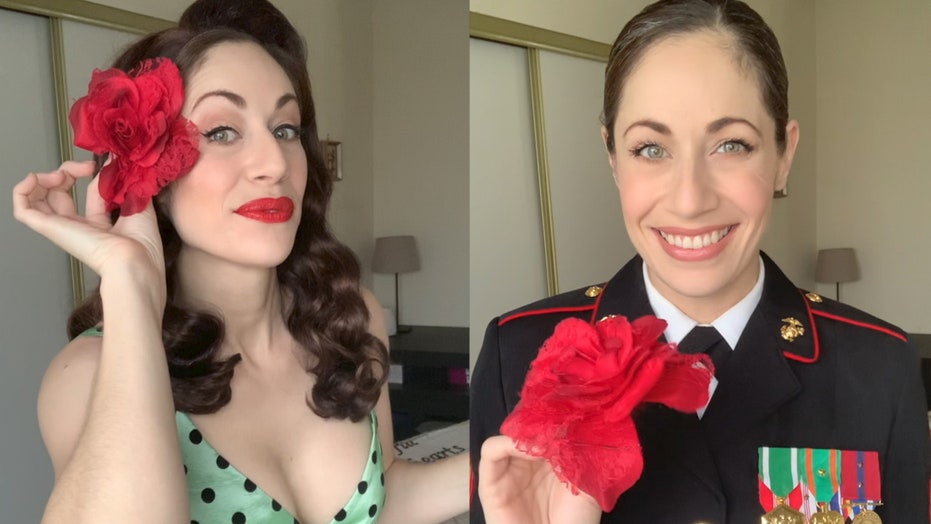 A group of veterans from Pin-Ups for Vets are giving 1940s-pin-ups an unexpected twist that’s breaking stereotypes and increasing visibility for women in the military in a viral Tik Tok challenge.

She’s an American sweetheart with red hot lips, rosy cheeks, and perfect pin curls—she’s a pin-up girl. Now, she’s so much more, and a group of veterans are giving these 1940s-style icons an unexpected twist that’s breaking stereotypes and increasing visibility for women in the military.

“When people usually think of a veteran, they don't automatically think, ‘woman,’" said Marine Corps veteran Jennifer Brofer. "We want to change the narrative and show people that women are veterans,”

Brofer joined more than a dozen other female veterans across branches of the military in their very own version of the viral TikTok “Don’t Rush Challenge,” which has already gotten over 2.5 million views on social media. Brofer explained that the idea of having the ladies go from pin-up to their military uniform in the video was the brainchild of Pin-Ups for Vets founder Gina Elise.

"The 'Don't Rush Challenge' is basically where someone looks a certain way, holds up an object to the camera, and then pulls the object away, and you see them totally transformed into something different,” said Elise. “So I felt like this challenge was absolutely perfect for our organization because we’re breaking stereotypes. Our ambassadors that go to VA hospitals nationwide are female veterans that dress up as pin-ups to boost the morale of the veteran patients.”

According to Elise, many of the veterans have said that volunteering with Pin-Ups for Vets has helped them to reclaim their femininity post-service. Brofer echoed Elise’s sentiments.I

“What love about the video is that it really shows the duality of female veterans that we can be both feminine and beautiful and also powerful and strong.”

Brofer told Fox News that it means a lot for her to be able to walk into a hospital room as a Pin-up for Vets ambassador and see smiles on veterans’ faces. She said it’s especially meaningful, however, to see fellow female veterans light up when they learn she’s a veteran, too.

It was for that reason that Elise decided to have the female veterans in their own ‘Don’t Rush’ video go from pin-up to military garb for the reveal. Elise wanted viewers to get a sense of what it feels like for the patients in the hospitals when they find out the visiting pin-up women are veterans.

While the coronavirus pandemic has halted Elise and Brofer from visiting hospitals, they both hope that the video will deliver a “digital morale boost” for everyone who sees it, while also giving the female veteran community well-deserved visibility.

“One of our ambassadors, Jovane, who’s a Marine veteran and who was actually in the video sums it up best,” said Elise. “She says there's nothing that says I can't be a hard-charging Marine and a lipstick-wearing pin-up, so I choose to be both.”

For more with Jennifer Brofer, Gina Elise, and Pin-Ups for Vets watch the full interview above.