In allowing more businesses to reopen, Mississippi Gov. Tate Reeves expressed hope for an economic rebound and confidence that the people of his state will abide by health guidlelines.

Appearing on "Cavuto LIVE" on Saturday, Reeves said he believes "very strongly" that government mandates, including those imposed to control coronavirus, can only stay in place for so long.

"We believe that individuals in Mississippi are smart. They can make good choices," he said. "They can do the things they need to do to keep themselves, to keep their family members, [and] to keep their neighbors safe without government telling them they have to do it. That's a principle that I believe in, and something that we are going to [make] happen here in Mississippi."

"There are some states that are saying that when they start to reopen in a week, or two or three weeks from now, they're going to do things like open construction and open manufacturing." Reeves said. "Those are industries that never shut down in our state. We're talking about very different things: apples and oranges from state to state based upon [a] unique situation."

A gloved shopper prepares to load up her purchases in the Kroger parking lot in northeast Jackson, Miss., Wednesday, April 8, 2020. African Americans in Mississippi are being disproportionately affected by the new coronavirus, and many have underlying health problems that make them more vulnerable to it, the state epidemiologist said Tuesday. (AP Photo/Rogelio V. Solis)

Reeves has faced criticism for pushing ahead with plans to reopen despite a spike in COVID-19 cases and deaths last week. The Republican governor held fast, citing the nation's highest unemployment rate since the Great Depression at 14.7 percent.

While he approved a two-week extension of his stay-at-home order, until May 25, salons, barbershops and gyms can reopen under restrictions.

Reeves said he understands the risks associated with his decision, including a possible jump in cases and deaths, but asserted that he is following the advice of White House task force member Dr. Deborah Birx. 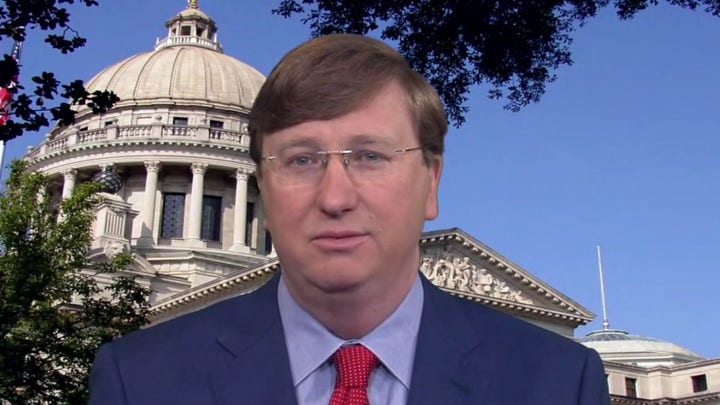 "One of the things that we have learned in talking to Dr. Birx and the coronavirus task force -- as well as talking to our public health experts -- is that, when you look at these kinds of businesses that have interpersonal contact, it is very critical that we protect not only the employees of these business, but also those who come in to get their hair cut and other personal grooming services," he said.

"We put very strict guidelines in place: protocols," he added. "The decision that we made ... is that there are 45,000 Mississippians who work in either barbershops or are regulated by the cosmetology board.

"We've had 200,000 Mississippians lose their [jobs] over the last six months. So almost a quarter of them were in those two areas, and it was because their government shut them down."

Said Reeves: "We know we have to give them an opportunity to earn a living, to provide food for their [families], and the way in which to do that is to give them strict guidelines.

"They want to be part of the solution, not part of the problem. And, I'm looking forward to them doing just that."