The Fox News contributor joined 'Fox & Friends Weekend,' arguing her remarks suggest the White House is still in a state of 'chaos.'

Fox News contributor Tammy Bruce argued Kamala Harris citing lack of leaving Washington D.C. as her biggest failure signals there is "chaos" in the White House during "Fox & Friends Weekend." Bruce weighed in on the vice president's recent interview, explaining how her answer did not touch on "real issues," and asserting it means the White House is still "scrambling."

TAMMY BRUCE: It's not, and again, the question was posed as a failure, not even a disappointment, it was a failure... Afghanistan didn't come up. The economy didn't come up, crime didn't come up, supporting the rioters with the Rioter Bail Fund didn't come up. So... It's interesting that the American people will see this as they've seen with her, which is spin, and at the same time, she's visited, I think, half a dozen countries. She's visited multiple states and cities, usually to do campaigning for Joe Biden or to go help Gavin Newsom. She's been fine getting out of the White House and getting out of Washington, D.C., but just not on the issues and on the framework that the American people care about. But what this tells you is, I have to say, is that and she laughed, obviously again. But she also said in part of that interview, she said...I'm really paraphrasing here, but she said, 'I'm being serious.' In other words, she knows it sounds absurd, but this is now the new line that they've decided on. As long as we're hearing excuses like this that don't touch on real issues that are word salads, you know that they're still scrambling and there's still chaos in the White House. 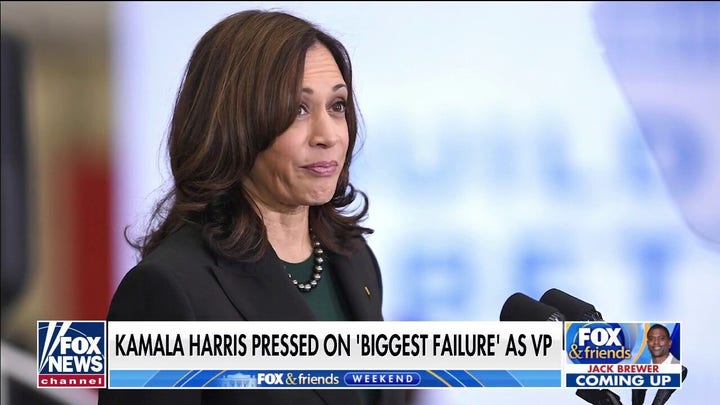