Kelsey Yasgar and her daughter Hayley react to an ‘equity’ survey that included gender identity questions being given to students at school.

A Minnesota fourth grade student and her mother expressed concern to their local school board after her class was given an "equity survey" and students were told not to tell her parents about the activity.

Sitting alongside her mother Kelsey, fourth grader Hayley Yasgar told "Fox & Friends" on Monday that the questions were confusing and it made her "very nervous and uncomfortable" when the students were told not to tell their parents.

THE WOKE MOB IS EVERYWHERE: HERE'S WHERE IT CAME FROM AND HOW ONE CRITIC BELIEVES IT CAN BE STOPPED

"The survey asked questions that some students didn’t understand. Even after hearing an explanation from their teacher, some still couldn't comprehend the survey questions," The Center Square reported.

The George Floyd incident sparked a nationwide conversation on race and the role of policing. School districts across America are pushing critical race theory on students to attempt to contextualize current events on matters of race. 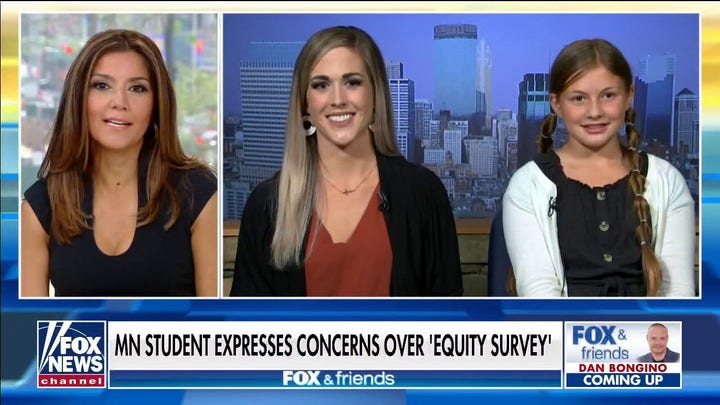 CRT curriculum has sparked a national conversation about the role of race and racism in school districts across the country. Often compared by critics to actual racism, CRT is a school of thought that generally focuses on how power structures and institutions impact racial minorities.

Kelsey Yasgar said that although parents were "informed that the equity audit was taking place, they were not informed on the date of the activity and not given other details." She explained further that due to the lack of transparency from the school district and from Equity Alliance Minnesota, the third party that administered the survey, parents were not informed of the questions being asked to the students.

Yasgar was "very upset" when her daughter told her that she was instructed by teachers not to repeat any of the questions being asked of them.

"I do want to say though I believe that this wasn't a single case that her teacher made this decision. We had been informed that this came down from the administration and Equity Alliance of Minnesota instructed them to make sure the children did not share this information with their parents and that should pose a great concern in any parents' eyes," Hayley said.

Fox News reached out to the district superintendent and Equity Alliance of Minnesota for statements but did not receive a response.