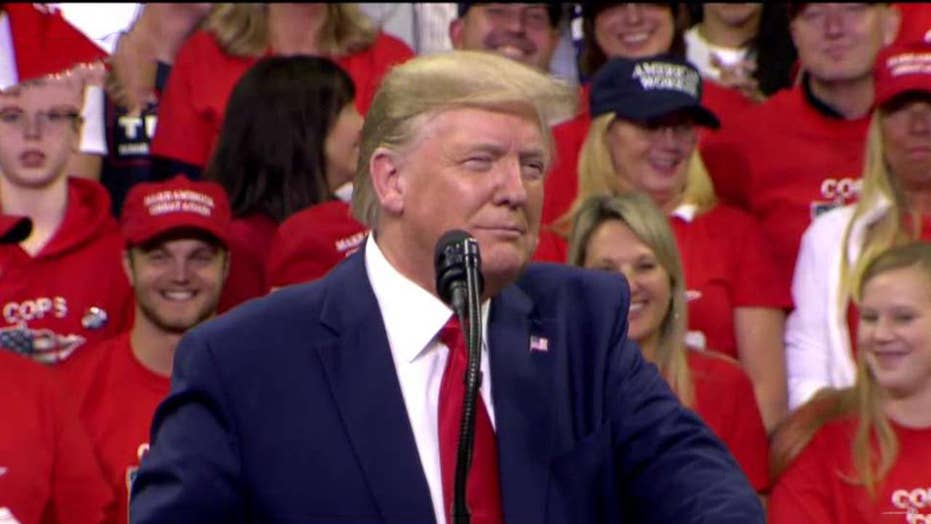 "Remember he and his lover Lisa Page," Trump said before mocking the two. "Oh I love you so much. I love you, Peter! I love you too Lisa! Lisa, I love you. Lisa, Lisa, Oh God, I love you, Lisa.

"And if [Hillary Clinton] doesn't win, Lisa, we've got an insurance policy, Lisa! We'll get that son of a b---h out."

Trump made the comments during a massive rally in Minneapolis, Minn. during which he claimed the former FBI agents -- as well as media outlets and Democrats -- were biased against him.

Page and Strzok were two of the agents who helped the FBI investigate Russian meddling during the 2016 election. The two exchanged texts that were critical of politicians, including Trump, and referred to an "insurance policy" before the election.

Conservatives have speculated that was a reference to an effort to undermine Trump and potentially remove him from office. Trump has repeatedly pointed out Strzok's and Page's affair on Twitter.

"Wow, Strzok-Page, the incompetent & corrupt FBI lovers, have texts referring to a counter-intelligence operation into the Trump Campaign dating way back to December, 2015," Trump tweeted in 2018.

Trump's rally came at a time when he fended off accusations that he tried to influence the 2020 election by pressuring Ukraine to investigate former Vice President Joe Biden.

Trump has denied any wrongdoing and released a rough transcript which showed no explicit quid pro quo for foreign aid.

Ukrainian President Volodymyr Zelensky, on Thursday, reiterated his previous defense of the phone call, saying that Trump did not blackmail him.