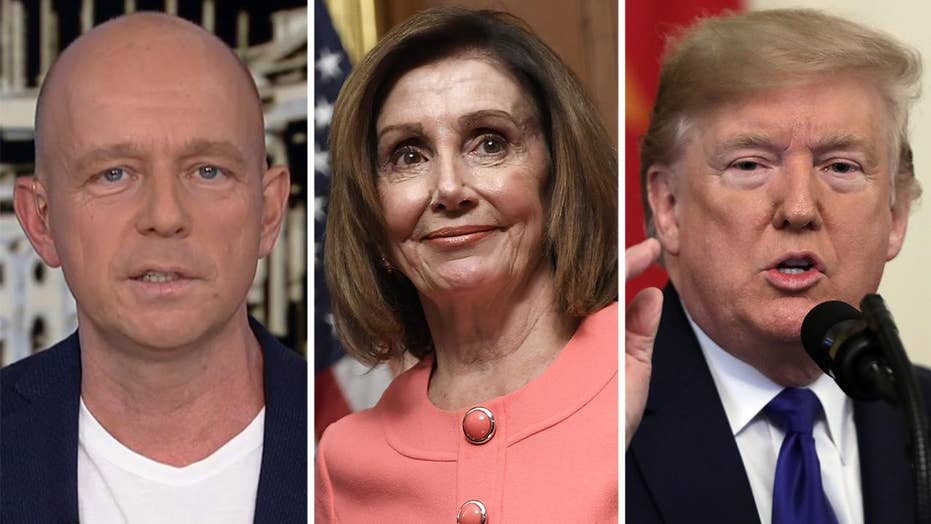 Speaker of the House Nancy Pelosi yuks it up with her pathetic impeachment pens while President Trump signs a historic trade deal.

On "The Next Revolution" Sunday, host Steve Hilton touted President Trump's recent victories over the Washington establishment, slamming the Democrats impeachment push and praising the president for his accomplishments.

"It's a totally different mindset when you put an outsider in the Oval Office, that mindset is what's delivering results on deregulation, immigration and border trade and all the rest of it," Hilton said in his opening monologue.

"All this is why he's delivering and why impeachment is not just a joke, but an insult to every American who has a right to expect that Congress, like the president, is spending its time getting real results for workers and families," Hilton said.

"Of course, you can forget about that from today's decadent Democrats. But the best thing the president can do is to focus on policy, on results," Hilton said. "So we continue to see that contrast between Trump results and Democrats stunts."

Charles Hurt, founder of Turning Point USA, joined Hilton and criticized the "ruling class," saying they are "infatuated" with  impeachment.

"America's divided, but it's not divided the way that the media wants us to believe," Hurt said. "It's divided between the ruling class that is just so infatuated with impeachment and destabilizing, destabilising this president and revitalization that's happening in this country."

"So the ruling class, the wise men of Washington, the kingdom of Washington, D.C., their entire agenda last 40 years has now been proven completely incorrect. They've been getting rich while America really has been falling behind," Hurt said. "And it's a disgrace that the media continues to ignore the results of this president."