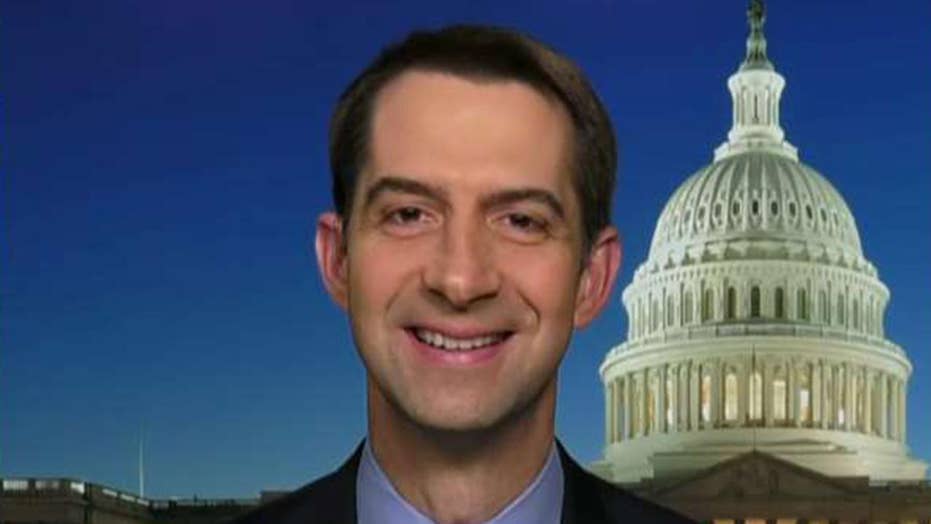 Sen. Cotton: Hunter Biden at top of the list of witnesses President Trump would want to call

Sen. Tom Cotton, R-Ark., appeared on "Tucker Carlson Tonight" Thursday and literally laughed off the chances of even one Senate Republican voting to remove President Trump from office following the forthcoming impeachment trial.

"Can you mention any scenario where the president loses Republicans, any Republicans in the Senate in this trial?" host Tucker Carlson asked.

"I don't know, Tucker," Cotton responded, later joking: "We [may] have to listen to [House Intelligence Committee chairman] Adam Schiff and [House Judiciary Committee chairman] Jerry Nadler drone on for so long that we sue for mercy and say we'll do anything to make it end."

Cotton doesn't expect the House's case against the president to change anyone's opinion.

"Despite Nancy Pelosi and Jerry Nadler's and Adam Schiff's best efforts, what we heard read on the Senate floor today simply does not add up to the constitutional standard of impeaching and certainly not removing a president from office," Cotton said, before taking a shot at Schiff. "So we'll listen to what they have to say. Although I got to say, just listening to 20 minutes of Adam Schiff was already pretty taxing today, I can't imagine 24 hours of it."

The Arkansas senator also criticized House Speaker Nancy Pelosi's handling of the impeachment articles and said Hunter Biden is at the "very top" of his witness list if witnesses are permitted.

"I know the left-wing media is always celebrating her, but after what we saw yesterday with those gold-embossed pens, I think Nancy is anything but a master strategist here," Cotton said. "As for Hunter Biden, if we're going to have any witnesses, I think Hunter Biden will be at the very top of the list of witnesses that the president would want to call."