Reuters was the latest outlet to publish an apparent defense of liberal school boards amid the national movement of parents wanting to play a bigger role in their children's education due to controversial, race-based curricula.

"School boards get death threats over race, gender, mask policies," the headline for the Reuters special report read, accompanied by a subtitle later in the piece titled, "Living in Fear."

Through contacts and interviews with 33 board members across 15 states, the news outlet found 220 threatening and harassing messages aimed at the officials over the last several months as parents have confronted their school districts over critical race theory, graphic materials in the classroom, and more. The authors, Gabriella Borter, Joseph Ax and Joseph Tanfani, provide several examples of death threats school board members have received, including in Pennsylvania’s Pennsbury school district, where officials received racist and anti-Semitic emails from around the country. One of the more alarming messages aimed at a school official in Loudoun County, Virginia read, "If she doesn’t quit or resign before the end of the year, we will kill her, but first, we will kill you!"

People gather to protest different issues including the board’s handling of a sexual assault that happened in a school bathroom in May, vaccine mandates and critical race theory during a Loudoun County School Board meeting in Ashburn, Virginia, U.S., October 26, 2021. Picture taken October 26, 2021. (REUTERS/Leah Millis)

But education activists like Bethany Mandel, an editor for a children’s book company, Heroes of Liberty and a contributing writer for Deseret News, say it's unfair for Reuters or other outlets to highlight a minority who are penning such foul messages.

"The people sending these messages are not representative of the whole, they do not represent all of the American parents who are seriously concerned about what’s taking place in the school board meetings,"" Mandel said in a statement to Fox News Digital. "They see that they are engaged in a war for their children’s education. The school boards understand that it is a war, too."

Mandel suggested the media is "grasping at straws" to demonize parents after a San Francisco school board voted to oust a few of its members over their apparent attempt at pushing progressive politics on students.

"They see what happened in San Francisco this week and know that the way they have been conducting business is no longer viable," Mandel said. "They are grasping at straws, and this is the straw they have decided to grasp. They are painting all opposition as fascist and terrorizing. Americans over the course of the last two years have caught on like never before to this tactic. It is going to backfire in a big way."

Others would point out that the Reuters piece omitted some context. For instance, the Pennsbury school district the authors highlighted lost in court against the Free Speech Institute for removing public comments from the record in violation of state open records laws.

"(The defendants) have done everything from shouting down citizens who dare question the official narrative; conspired to silence and denounce dissenters; and even ‘memory holed’ speech based on its viewpoint, deleting speech from public records as though it was never spoken," the court document stated, according to the Bucks County Courier Times.

Parents Defending Education President and Founder Nicole Neily challenged Reuters' coverage and accused the outlet "failing" to tell the whole story and by making out the school boards to be the victims.

"Journalism's mission is ostensibly to 'hold power accountable' - so why, when it comes to covering education issues, are reporters acting as the handmaidens of the powerful?" Neily said in a statement. "By failing to tell the full story about the conflicts and disagreements in local communities, journalists are further undermining their own profession. It's little wonder that trust in media is at a historic low point."

Colin Doniger makes a public statement as people protest different issues, including the board’s handling of a sexual assault that happened in a school bathroom in May, vaccine mandates and critical race theory during a Loudoun County School Board meeting in Ashburn, Virginia, U.S., October 26, 2021. REUTERS/Leah Millis (REUTERS/Leah Millis)

"The result in these districts is what educators and experts describe as a brain drain of those who are most committed to fighting racism in schools," Kingkade wrote.

"Forcing millions of kids into a one-size-fits-all school system is destined to fail because families disagree about how they would like their children educated," he told Fox News Digital. "Families have differing values and preferences, and that's okay. The government school system forces parents into unnecessary conflict, and at the end of the day, many families are left unhappy with the result."

Attorney General Merrick Garland and the Department of Justice were condemned by parents and politicians for issuing a memo last October instructing local law enforcement to coordinate with the FBI in investigating disruptions at school board meetings nationwide. Upset parents struck the DOJ for treating them like "domestic terrorists." 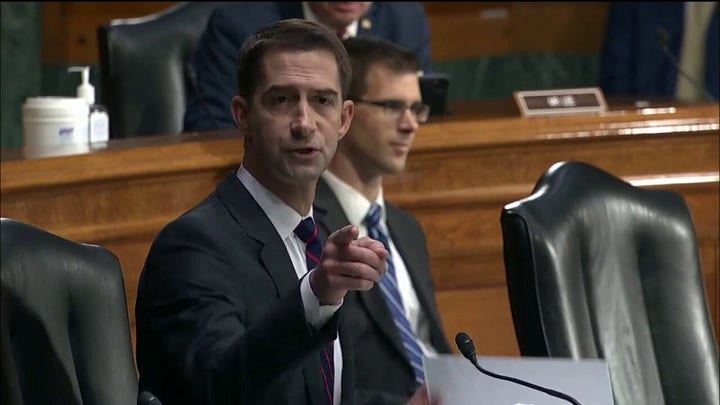 Sen. Josh Hawley, R-Mo., is among the group of Republicans who recently sent a follow-up letter to the DOJ demanding answers.

"That silence must end. The American people deserve answers," Hawley said. "You said last fall that you did not know whether members of your office coordinated with the NSBA, but since then you have had plenty of time to find out. You must immediately explain your own role in this affair, as well as how intimately involved the NSBA and other groups were in shaping the official actions of your office."

The parental uprising has had an impact on recent elections, including in Virginia's gubernatorial race in November, in which Republican Glenn Youngkin scored a surprise win over Democrat Terry McAuliffe.

"I don't think parents should be telling schools what they should teach," McAuliffe infamously said during a debate.