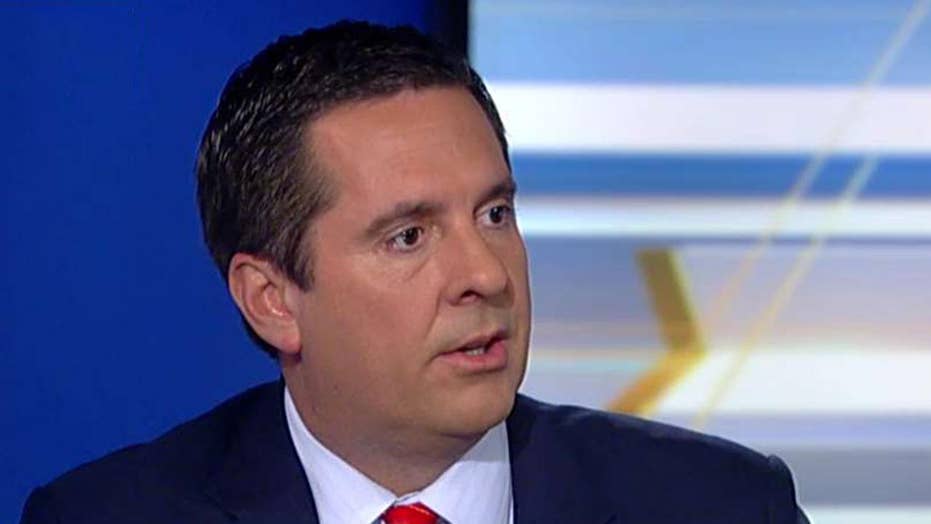 Rep. Devin Nunes, R-Calif., compared House Democrats and the media to a "cult" Wednesday amid the Trump impeachment inquiry, but said he believes the president and the Republican Party will emerge unharmed.

"I think we're going to be OK because the facts just aren't there," Nunes said on "The Ingraham Angle," in response to whether Senate Republicans fully support the president. "So we go behind we go into the basement every day and things leak out. And it's a bit like watching a cult. It's become a cult."

"I think we're going to be OK because the facts just aren't there."

House committees have held nearly a dozen depositions of witnesses who have testified behind closed doors about their knowledge of a July 25 phone call between Trump and Ukrainian President Volodymyr Zelensky. It's been alleged, by an anonymous whistleblower, among others, that Trump sought to persuade the foreign leader to open an investigation into former Vice President Joe Biden, his son Hunter Biden and their business dealings in Ukraine in exchange for military aid to that nation.

Nunes said Mitt Romney of Utah stands as the only Republican senator so far to not stand with Trump against impeachment accusations.

The congressman -- who serves as ranking member of the House Intelligence Committee -- then compared the media to another "cult," saying mainstream journalists were waiting on "marching orders" from Democrats.

"And then you walk outside, 50 feet outside the doors, and you see another cult. And that's the media. They're down there every day, 14 hours a day. And, you know, at times it will swell to like a hundred people in the mainstream media," Nunes said. "And they're just waiting for the marching orders ... and then they run the narrative up."