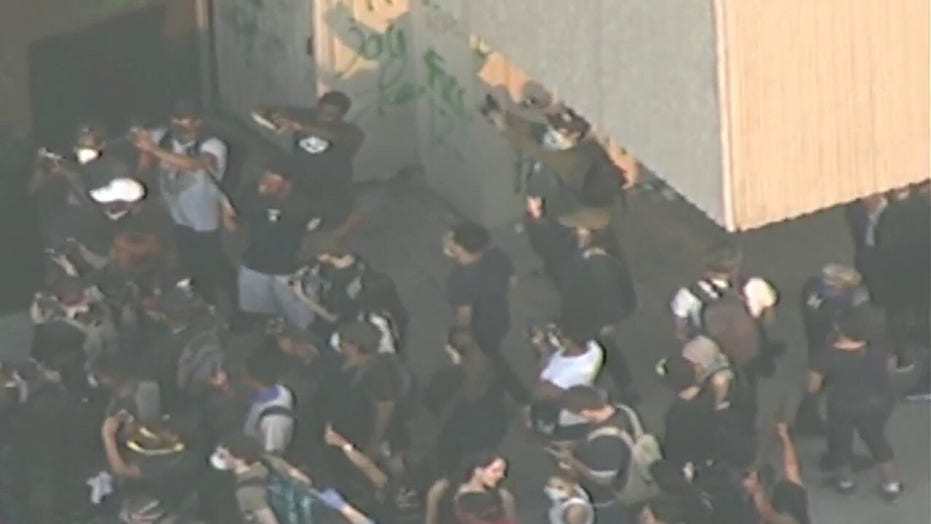 Rapper and activist Killer Mike had an urgent plea for CNN following the vandalism its headquarters faced in Atlanta amid the George Floyd protests.

Killer Mike, an Atlanta native, was speaking at a news conference alongside Atlanta Mayor Keisha Lance Bottoms on Friday night as a violent mob defaced the CNN Center's iconic sign outside the of the building, broke windows, and threw objects inside the lobby.

During his remarks, the rapper had some choice words for the liberal network.

"I love CNN ... but what I'd like to say to CNN right now- karma's a mother..." Killer Mike said. "Stop feeding fear and anger every day. Stop making people so fearful. Give them hope!"

He continued, "I'm glad they only took down a sign and defaced the building and not kill human beings like that policeman did. I'm glad they only destroyed some brick and mortar and they didn't rip a father from a son, they didn't rip a son from a mother like the policeman did. When a man yells for his mother in duressing pain and she's dead, he's essentially yelling 'Please God, don't let it happen to me.' And we watched it."

Killer Mike then posed a question to those "on the other side of this camera."

"After it burns, will we be left with char or will we rise like the phoenix out of the ashes like Atlanta has always done?" he asked. "Will we use this as a moment to say that we will not do what other cities have done and, in fact, we will get better than we've been?"

A violent mob erupted at CNN's headquarters in Atlanta Friday amid nationwide demonstrations following the death of George Floyd, with many seen vandalizing the entrance of the building in videos posted to social media.

Earlier in the day, CNN reporter Omar Jimenez and his team were taken into custody around 5:10 a.m. local time as they were reporting live outside a liquor store that had been set ablaze in the demonstrations. An hour and a half later, the network reported their release.

“A CNN reporter & his production team were arrested this morning in Minneapolis for doing their jobs, despite identifying themselves -- a clear violation of their First Amendment rights,” the network said in a statement. “The authorities in Minnesota, including the Governor, must release the 3 CNN employees immediately.”

Police reportedly claimed Jimenez and the crew were taken into custody because they were told to move and didn’t listen. CNN said Minnesota Gov. Tim Walz “deeply apologizes” for the incident and had been working to have the three employees freed.

The protests in the Twin Cities were sparked by the death of 46-year-old George Floyd, a black man who died Monday after a white police officer, Derek Chauvin, kneeled on his neck for several minutes as he was being arrested on suspicion of forgery.

Video footage that went viral after the arrest showed Floyd telling the police officer "I can't breathe" as passersby begged the officers to get off him. Moments later, Floyd became nonresponsive and was pronounced dead a short time later at a local hospital.

Chauvin was arrested Friday and charged with third-degree murder and manslaughter. The other three officers involved with the arrest have been fired amid calls for their arrest.