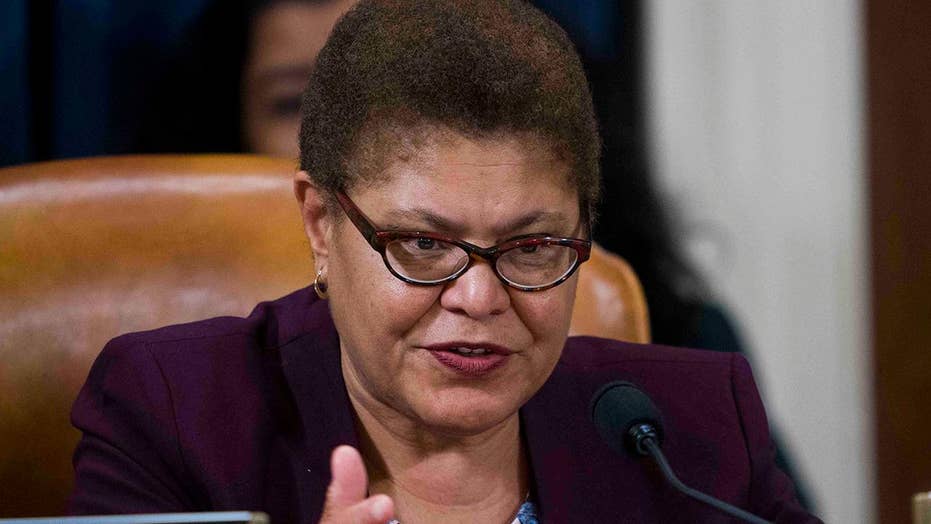 Democrat open to impeachment again if Trump wins in 2020

Fox Nation host Rachel Campos-Duffy scorched House Democrats on Wednesday after Rep. Karen Bass, D-Calif., said that she was open to impeaching President Trump again if he wins the re-election in 2020.

“It just underscores what we have always known, that they are not concerned about facts, that they’re completely obsessed with getting rid of Trump. That all of those investigations from the Russia hoax to Ukraine, all of those things have been about trying to find a crime and fit it somehow into this impeachment narrative,” Campos-Duffy told “Fox & Friends.”

On Tuesday, TMZ founder Harvey Levin presented Bass with a scenario in which Trump wins a second term but Democrats take over the Senate from Republicans.

"There's no such thing, really, as double jeopardy in an impeachment trial because it's political," Levin said. "Suppose he gets re-elected... and you win back the Senate in a big way. If you did that, would you be inclined to take a second bite at the apple and reintroduce the exact same impeachment articles and then send it through again a second if you have a Democratic Senate on your side?"

"So, you know, yes, but I don't think it would be exactly the same and here's why," Bass responded. "Because even though we are impeaching him now, there's still a number of court cases, there's a ton of information that could come forward. For example, we could get his bank records and find out that he's owned 100 percent by the Russians."

"You are absolutely right in your scenario," she continued. "But the only thing I would say slightly different is, it might not be the same articles of impeachment because the odds are we would have a ton more information, and then the odds of that, sadly enough, is that, you know, he probably has other examples of criminal behavior."

Campos-Duffy pointed to a recent survey that showed 58 percent of voters in Wisconsin are against impeachment. But that does not seem to bother some leading Democrats.

“They are willing to sacrifice winning in 2020, taking over or keeping their majority in the House and winning over the Senate because this is wildly unpopular where I live here in the middle of America, which is Wisconsin and the Midwest," she said.