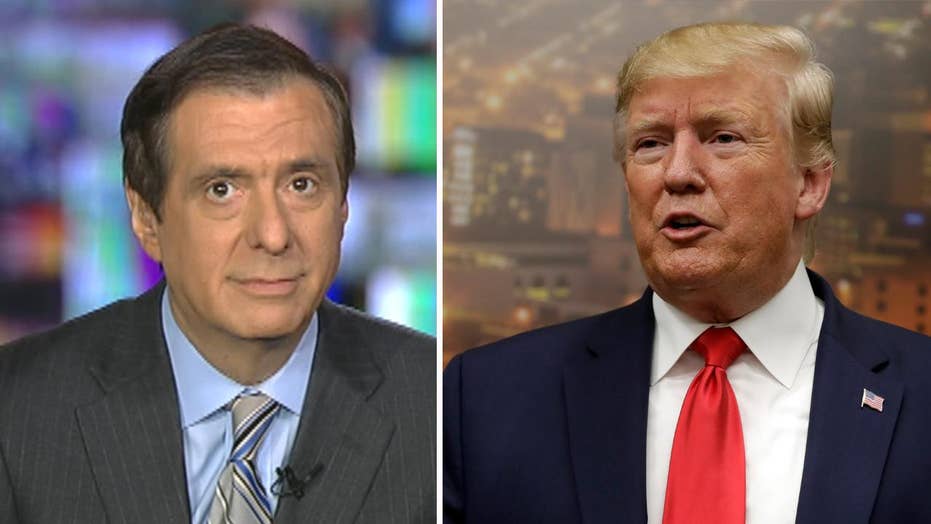 The coverage was overwhelmingly negative, going far beyond the Trump-isn’t-very-empathetic reviews he got when, for instance, he was tossing paper towels into a crowd after the Puerto Rican hurricane.

This was more of an indictment: the president made things worse in the wake of two mass shootings.

Now I’ll be the first to say it would have been better if Trump had put his phone away on Wednesday.

And there is no question that his past divisive rhetoric is a legitimate aspect of the story.

But many of the stories and segments were truly striking in their one-sidedness.

They conveyed the impression that only Trump had fouled the atmosphere with partisan swipes and Twitter taunts.

But in most of these instances, Trump was responding to slashing attacks from those he wound up criticizing. And yet that was repeatedly downplayed or dismissed.

It almost seems as if it’s acceptable for the president’s opponents to call him a white supremacist who is fomenting and condoning mass violence, but if he defends himself, he’s committed some awful breach of public decorum. Perhaps some journalists see the anti-Trump rhetoric as justified, and therefore acceptable?

Sure, you can say, he’s the president and should rise above the attacks in the interest of national unity. But why aren’t the critics held to a similar standard?

“Trump Uses a Day of Healing to Deepen the Nation’s Divisions.”

See? It’s all his fault.

A “day intended to show compassion,” the paper says, “quickly devolved into an occasion for anger-fueled broadsides against Democrats and the news media.”

The “plan went awry” before the first flight, the Times says, when Trump tweeted at "Beto (phony name to indicate Hispanic heritage) O’Rourke," saying he was polling at 1 percent in the Democratic race and should “be quiet.”

But the former El Paso congressman, trying to revive his campaign, has repeatedly slammed Trump as a white supremacist and suggested he is condoning mass violence. Shouldn’t that be mentioned right away?

The Times story also notes that Trump took a whack at Joe Biden, but at least points out that the former VP gave a speech that same day accusing the president of having “fanned the flames of white supremacy.” In fact, the speech was a full-throated attack on Trump’s “toxic tongue”:

“How far is it from Trump’s saying this ‘is an invasion’ to the shooter in El Paso declaring ‘his attack is a response to the Hispanic invasion of Texas?’ Not far at all,” Biden said.

The Democratic front-runner has every right to make his case, but isn’t he being divisive as well?

Trump’s tweeted response: “Watching Sleepy Joe Biden making a speech. Sooo Boring! The LameStream Media will die in the ratings and clicks with this guy.”

“On a day when President Trump vowed to tone down his rhetoric and help the country heal following two mass slayings, he did the opposite — lacing his visits Wednesday to El Paso and Dayton, Ohio, with a flurry of attacks on local leaders and memorializing his trips with grinning thumbs-up photos.”

The president did come on strong after his meeting with Ohio Sen. Sherrod Brown and Dayton Mayor Nan Whaley. The senator said Trump was well received by hospital patients there, but that some didn’t want to meet with him, and that the president has been using racist language.

Trump “reacted with fury,” according to the Times, and called their presser a “fraud.”

By the way, Trump also accused the media this week of spreading anger and rage, and in our polarized environment, he has a point.

Now the president could have chosen to stay above the fray and ignore the attacks, but that’s not in his nature.

My only question is this: If Trump’s opponents are castigating him in the most caustic terms, and he fights back, why are the stories mainly framed around the president ruining a healing moment? Why don’t they say that both sides are engaging in partisan politics at a time when the country is grieving?

And all this has the unfortunate effect of diverting the focus from the victims and their families at the center of these twin tragedies.