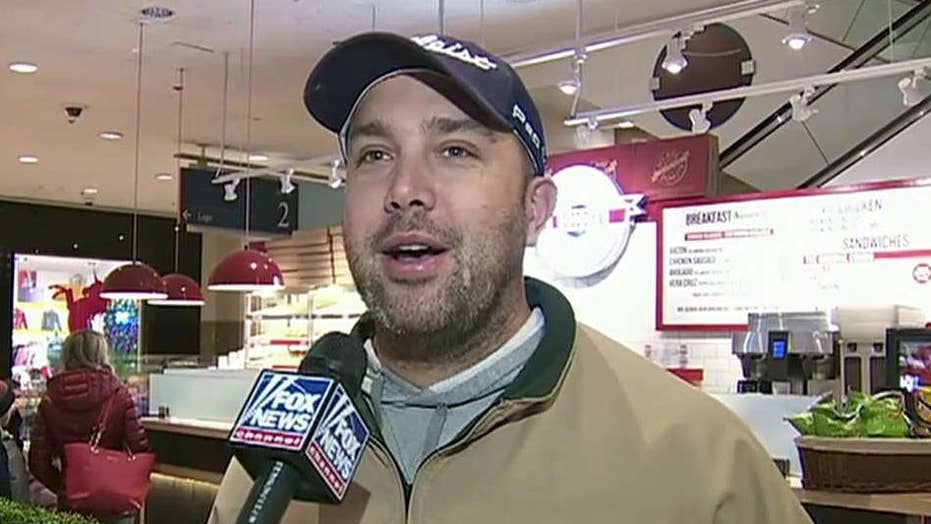 Shoppers hit the stores in search of last-minute gifts

The National Retail Federation anticipates the holiday shopping season will wrap up with robust numbers thanks to consumer confidence and a strong economy; Matt Finn reports from Chicago.

A top executive at a media company that provides the music selection heard in thousands of retail stores nationwide has disclosed that his firm has pulled the classic Christmas tune "It's Beginning to Look a Lot Like Christmas" from its playlists because of a lyric that refers to guns.

PIERS MORGAN RIPS JOHN LEGEND FOR REWRITING 'BABY, IT'S COLD OUTSIDE' INSTEAD OF RAPPERS' 'FILTH'

"It's Beginning to Look a Lot Like Christmas" was written in 1951 by Meredith Wilson and famously sung by Perry Como and The Fontane Sisters. The song's third verse opens with the lines: "A pair of hop-a-long boots and a pistol that shoots/Is the wish of Barney and Ben."

Mood Media did not immediately respond to Fox News' request for comment. The Austin-based company bills itself as “the world’s leading in-store media solutions company dedicated to elevating the Customer Experience" with the mission to create "greater emotional connections between brands and consumers through the right combination of sight, sound, scent, social mobile and systems solutions."

Some of Mood Media's clients include retail giants like Target, Claire's, and Pandora as well as major hotel chains like Hilton, Marriott, and Hyatt. The company may be best known for its 2011 purchase of background music company Muzak Holdings for $345 million.

"It's Beginning to Look a Lot Like Christmas" is not the first classic Christmas song to come under scrutiny.

The romantic duet "Baby It's Cold Outside" has been slammed by critics in the #MeToo era as a song that doesn't promote consent. Earlier this year, singers John Legend and Kelly Clarkson debuted their own version of the tune with updated lyrics that promote a woman's "choice."

The original version of the song has been removed from Mood Media's catalog.