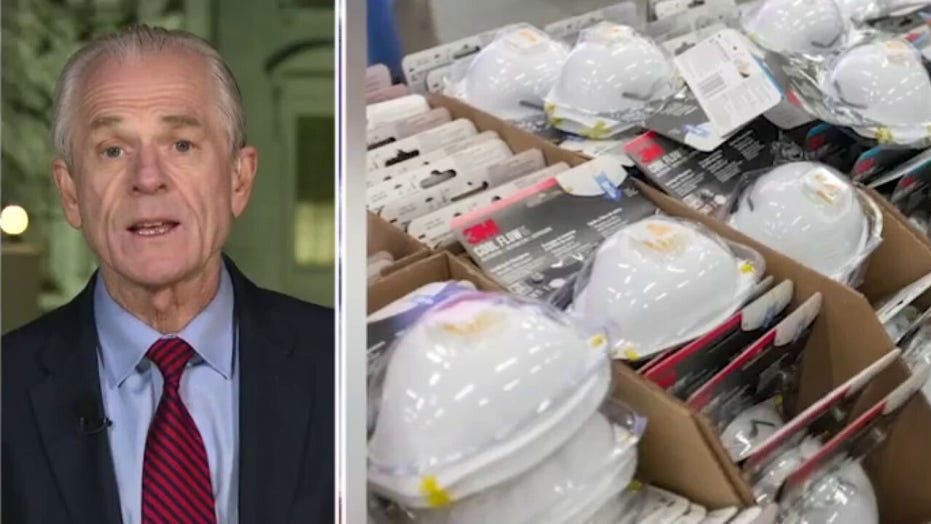 "Let me just say that 3M needs to stop whining and just produce masks and get them to the American people," Navarro told "Tucker Carlson Tonight."

"I've been dealing with hundreds of CEOs on the front lines here [of] President Trump's war against the virus," Navarro added, "and 3M has been doing nothing but dissembling, he can't get any data out of them."

Minnesota-based 3M has come under fire for exporting U.S.-made masks and other protective equipement to Canada and Latin America. On Thursday, President Trump invoked the Defense Production Act to order 3M to prioritize orders of N95 masks for the federal government's national stockpile.

3M CEO Mike Roman told Fox Business Network's "Maria Bartiromo's Wall Street" Friday that the company sells its respirators "through authorized distributors and we sell directly to governments and the distributors take those to customers that have the greatest needs and we’ve been working with FEMA in the U.S. to make sure we are prioritizing those with the greatest need ... A small percentage, less than 10 percent of our respirators in the United States are exported to Canada and Latin America to support their health care workers. We are often the sole provider of those respirators in those countries."

“As we've been telling the administration for days and days,” Roman added, “We're happy to ship our overseas production to the U.S. However, there are consequences on a humanitarian level and that includes stopping exports to Canada and Latin America.”

Navarro accused 3M of "acting like a sovereign nation" and said the company's public relations department "thinks it's the State Department."

He said that U.S. companies will and should continue to export goods, but added that 3M brass have to stop "whining and spinning" and work on behalf of the American people.

"We don't have the hours, much less the minutes to deal with them," said Navarro, in response to which host Tucker Carlson remarked endearingly that the trade adviser continues to be "the most blatant public official in government."