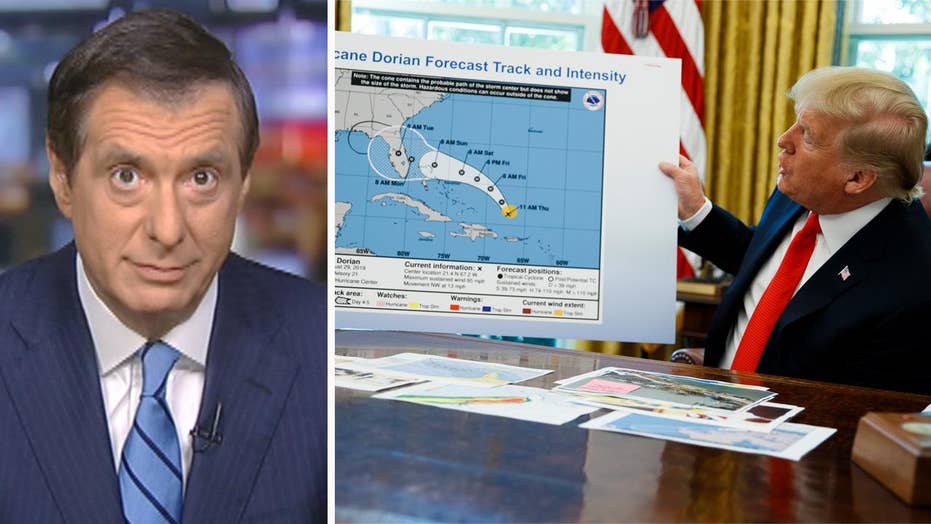 Howard Kurtz: A press corps obsessed with missteps vs. a president who won’t let go

There is something seemingly ludicrous in the media obsessing on a squiggle drawn on a map with a black Sharpie, especially with millions in the path of a destructive hurricane.

And yet the Category 5 controversy must be added to the list of disputes that Donald Trump brought upon himself by doubling, tripling and quadrupling down.

You can practically hear the media calls for a special prosecutor as the president denied knowing who drew a crude black bubble on a days-old National Weather Service map to include a sliver of Alabama in the storm’s potential path—just as the president had originally claimed.

On one hand, the tidal wave of coverage—story after story, segment after segment—was way out of proportion to the alleged offense. CNN even ran an on-screen chyron: “As People Die, Trump Defends Presenting Doctored Map.”

At the same time, the president was again displaying his adamant refusal to let go of previous controversies where he feels he has been unfairly criticized. In this case, it was the criticism of his Sunday declaration that the hurricane might reach Alabama, which was contradicted by government forecasts. A minor mistake, easily corrected. But by using the Aug. 29 map with the added black squiggle, Trump opened the floodgates of criticism well after the press had moved on.

He also tried to claim vindication by tweeting a day-earlier map: “As you can see, almost all models predicted it to go through Florida also hitting Georgia and Alabama. I accept the Fake News apologies!”

It will not surprise you to learn that no apologies were forthcoming. In fact, the Washington Post reported that tampering with official weather maps is…illegal.

Now there’s obviously a legitimate story here. Who wielded the now-infamous Sharpie? A White House official told Fox it was someone in the room when Trump was meeting with his emergency team, but wouldn’t say who.

Still, some pundits are using this episode to rail about Trump being a pathological liar who doesn’t care about people dying from hurricanes. It is practically being played as a scandal. And there are online memes with Sharpie marks to doctor famous photos, such as putting more people in Trump’s inaugural crowd or making him taller.

But if the media are fixated on this misstep, so is the president. Time and again, he brings up controversies that have faded from the news in an effort to vindicate his past position. If not for the altered map, precisely no one would be talking about Alabama today.

Late yesterday, Trump again tweeted five- and six-day old NOAA forecast maps, saying: “Just as I said, Alabama was originally projected to be hit. The Fake News denies it!” But some of those maps showed only a 5 or 10 percent chance of the storm hitting a sliver of Alabama, and the projections had moved east by the time Trump first mentioned the state being in jeopardy on Sunday.

With the hurricane having hit the Carolinas and still barreling its way up the East Coast, the constant back-and-forth over a black squiggle feels like a giant distraction.