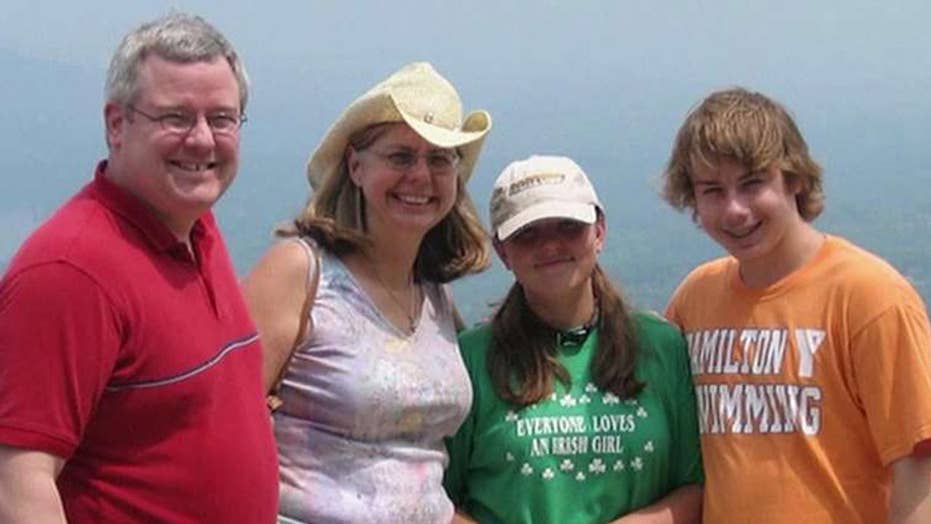 Tricia and Kurt Baker founded Attitudes in Reverse after their son Kenny Baker ended his life; if you or someone you know needs to talk, the National Suicide Prevention Lifeline is available 24-hours a day at 1-800-273-8255.

A New Jersey couple has found a way to turn grief into hope after their 19-year-old-son committed suicide just weeks before his high school graduation.

Tricia and Kurt Baker said their son Kenny struggled with depression for years, often feeling despondent as he struggled to fit in.

TENNESSEE TEEN KILLS HIMSELF AFTER CLASSMATES OUT HIM AS BISEXUAL ON SOCIAL MEDIA, FAMILY SAYS

Kurt then spoke about the choice the Bakers had after their son's death, and whether they would fight to raise awareness on the issue.

"We had to make a decision literally that day, whether we were going to engage in the conversation or whether we were going to let it be written without us," Kurt said. "The story probably would not have been written truthfully as far as the factual matter, so we were able to actually write our own sidebar story and actually start to advocate for those with mental health disorders very, very early on."

The couple decided to start a non-profit organization called Attitudes in Reverse, which focuses on mental health education and support for students from elementary school through college.

Because their son was so close to finishing high school when he died, the Bakers began their mission by talking to high school students about the importance of taking care of their mental health, as well as understanding others who suffer from mental disorders.

"We kind of started our mission in high school, talking to people in high school, and we were then invited down to middle schools, and initially we were a little concerned about talking to people a little bit younger," Kurt said. "Once we engaged them we found out that really middle school is more the high school of our age, and since then we're now talking to students as young as second grade. We're talking to them about good mental health and by engaging in good mental health, we're hoping to lower the suicide rates."

"We found that suicide rates of those [children] 12 and under have actually doubled in the last 10 years," Tricia said.

On Oct. 10, World Mental Health Day, the couple are urging people who suffer from depression or other mental health disabilities to seek the help and medical care they need.

Approximately 800,000 people commit suicide a year, which equates to one death every 40 seconds across the globe, according to the Centers for Disease Control and Prevention.

"We all have to look out for each other," Tricia said. "Most people who are contemplating suicide will somehow talk about it first. We just don't know how to listen. We're not trained on how to listen. We have to take all talk about suicide seriously and then we have to be there for each other. We have to be kind to each other and be empathetic. We talk a lot about discrimination but I believe that people with mental health diagnoses, they're still one of those groups that we don't talk about and they get discriminated against all the time. We just need to be a little bit more understanding and compassionate towards those that do struggle."

"We want to engage in hope," Kurt added. "It's part of what we need to do because we've found that those who kind of work through the mental health disorder, it cycles is what happens. And there are very, very low times, and those who are suffering from mental health disorders know this only too well. It's sometimes very difficult to literally get up every day. We believe that Kenny woke up every day and he was fighting for his life to live that day but the truth is, if you are able to make it through and find strategies, over time, you can live a happy and healthy life."