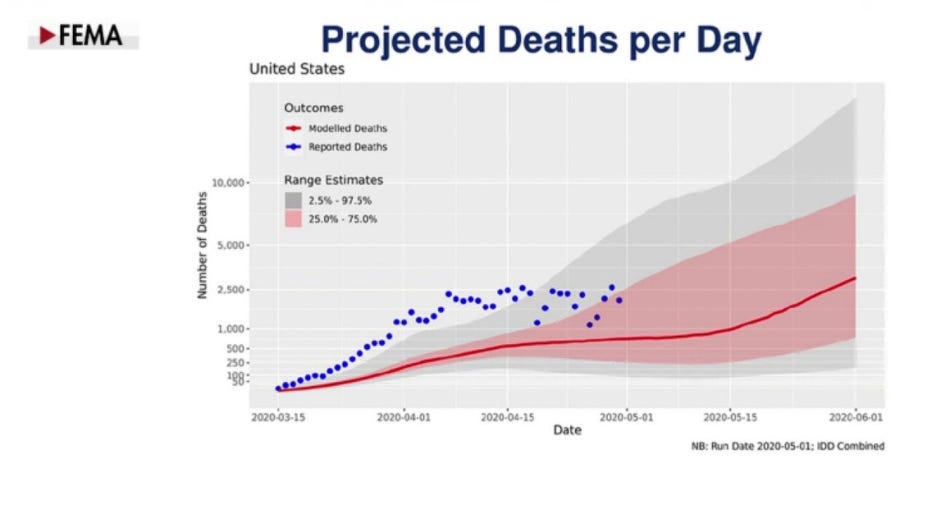 One unmistakable side effect of the media’s round-the-clock coronavirus coverage is scaring the hell out of people.

Several polls show that a majority of Americans believe the news business has hyped the threat from the virus, though that view has declined as the death toll in this country, now surpassing 69,000, has risen.

I’d prefer to believe that the fear factor is based on the cacophony produced by wall-to-wall virus news, rather than any effort to promote a pandemic that is already filled with grim statistics.

WHY TRUMP’S APPROACH IS NOT QUITE LINCOLNESQUE

But the past day or so has seen a story significantly blown out of proportion.

Here’s how the New York Times led off its exclusive:

“As President Trump presses for states to reopen their economies, his administration is privately projecting a steady rise in the number of coronavirus cases and deaths over the next several weeks.”

Before we go any further, the administration is not “projecting” this. In fact, the Trump team has been trying to knock down the story.

And a troubling story it is:

“The daily death toll will reach about 3,000 on June 1, according to an internal document obtained by The New York Times, a 70 percent increase from the current number of about 1,750.”

And then the paper links that to what it views as a political miscalculation: “The numbers underscore a sobering reality: The United States has been hunkered down for the past seven weeks to try slowing the spread of the virus, but reopening the economy will make matters worse.”

Not until the 11th paragraph did the Times report that the White House was disputing the document’s significance.

In its followup piece, the Washington Post’s lead calls it “a draft government report,” and the third paragraph points out that “the White House and the Centers for Disease Control and Prevention disavowed the report.”

What’s more, the Post quotes the man who created the model, Justin Lessler, an associate professor of epidemiology at the Johns Hopkins Bloomberg School of Public Health, as minimizing its importance:

“‘I had no role in the process by which that was presented and shown,’ said Lessler, who added that the data was presented as an ‘FYI’ of work still in progress to officials within the Federal Emergency Management Agency. ‘It was not in any way intended to be a forecast.’” He said the projected death toll was possible but depends on decisions being made today.

White House Press Secretary Kayleigh McEnany said yesterday: “The Johns Hopkins’ study being pushed around by the media as factual is based on faulty assumptions and is in no way representative of any federal government projections...This ‘study’ considered zero mitigation, meaning it was conducted as though no federal guidelines were in place, no contract tracing, no expansion of testing, while removing all shelter in place protocols laid out in the phased approach of the Opening Up America Again guidelines... The media should be more responsible in its reporting and give the full set of information to the American public.”

The Trump campaign was more blunt, saying the Times “chose to stoke fear instead of report the facts.”

Nate Silver of 538 tweeted, “Can’t believe the NYT made this their print headline. There is no evidence this is some sort of official White House projection.” Silver spent years at the Times.

We live in a headline culture, a Twitter environment in which news gets atomized and oversimplified as it ricochets across the web and cable shows. Even if the Times had used more caveats, those would have quickly melted away.

The president dramatically underestimated the virus’ impact at the outset, then settled on an estimated death toll of 60,000, only to acknowledge Sunday on Fox News that the number could rise as high as 100,000. So I’m interested in hearing from lots of medical voices on where this pandemic is heading.

But the truth is there are so many variables that no one knows for sure. And one danger of being mired in statistics is that everything seems so abstract. If the final death toll winds up being 100,000 and not 300,000, is that a “victory,” to lose so many of our loved ones?