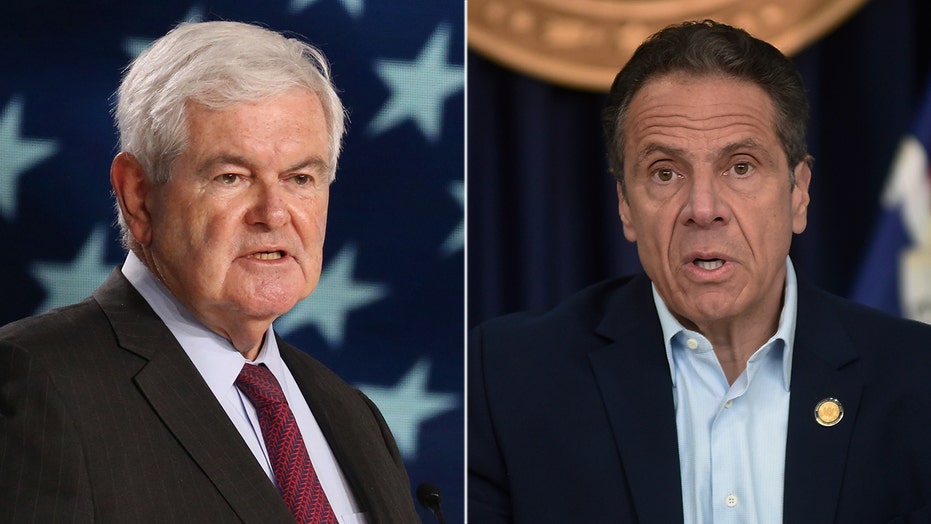 Newt slams Gov. Cuomo's response tearing down statues: 'What he said is a disgrace'

'No one has the right to destroy statues randomly,' says Newt Gingrich discussing Trump's expected executive order on protecting monuments

Former House Speaker Newt Gingrich said Wednesday that New York Gov. Andrew Cuomo’s response to the planned removal of a statue of Theodore Roosevelt from the entrance to the Museum of Natural History was “a disgrace.”

“I don’t know if he intended to, but Governor Cuomo now made clear what the choice is," Gingrich told “Outnumbered Overtime". "You want to live in a country with looters and people who tear down statues, you ought to vote Democrat.

Cuomo and New York City Mayor Bill de Blasio have expressed support for the museum's decision to remove the Roosevelt statue in the wake of backlash following protests over the death of George Floyd in Minneapolis police custody.

“I think the museum has a made a decision," Cuomo told MSNBC Monday. "They think the statue in this environment is in bad taste, they want to take it down, I support their decision."

Gingrich added Wednesday that the November election may be the most important since 1860 and the gap between the two opposing parties is “enormous.”

“I think every American should be deeply offended by Nancy Pelosi’s comment [implying] that Sen. [Tim] Scott [R-S.C.] and Republicans killed George Floyd," Gingrich said. "I think she is losing her mind. How could any responsible person say something like that?”

“In the end," Gingrich went on, "we’re going to have to start arresting people. We have no choice. Once the mob is out of control, if you don’t stop, it just gets bigger, more vicious, more bloody.”