"Much of the fault" for the mounting Russia-Ukraine conflict lies with former President Donald Trump, according to The Atlantic's Anne Applebaum.

During a segment on MSNBC's "Morning Joe," Applebaum spoke with host Mika Brzezinski to discuss the United States' role in escalating tensions between Russia and Ukraine and how she finds the former president's foreign policy largely responsible.

"I think it's also important to remember, going back to something that we talked about earlier, that Putin has made various efforts to undo western military support for Ukraine, including during the Trump Administration," she said.

"If you remember, the argument over Trump’s first impeachment was about Trump refusing to give military aid to Ukraine because he imagined he could get some dirt on Joe Biden from the Ukrainians," she said. "So why didn’t Putin do this during the Trump Administration? Because he thought Trump was weakening Ukraine, especially on this ground. The problem of Ukraine being unfortified goes back several years and much of the fault lies in the Trump Administration."

Amid her criticism of the former president, Applebaum said she finds it difficult to see how a diplomatic approach to the Russia-Ukraine conflict is possible considering Russian President Vladimir Putin stated that "there isn't one."

RUSSIA-UKRAINE: WHITE HOUSE: RUSSIA COULD BEGIN ATTACK ON UKRAINE 'AT ANY TIME'

"Whether there's a military path or not is something that will have to be determined in the next few days," she said.

Other personalities, including "The War on the West" author Douglas Murray and Iowa Republican Sen. Joni Ernst, place the blame on current President Biden and the Democratic Party instead.

"We had four years of the Democrats making all discussion of Russia basically impossible because of their crock claims about the Russian conspiracy with the last election," Murray said during an interview with "Fox and Friends" host Pete Hegseth Wednesday. 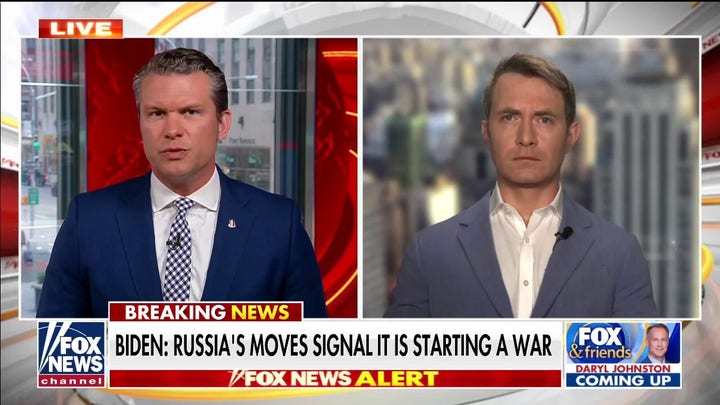 "Biden himself went on and on about Russia when he was running for office. I just watched again, yesterday, one of his campaign videos from 2019 where Biden actually tried to raise money from Americans by saying 'Putin doesn't want me in the White House. I'm such a tough guy.' What's it got him? What's it got anyone?"

Ernst dug at Biden's energy policies by saying Americans need to "push back" against Putin.

"Stop Nord Stream 2. Ramp up American energy and get away from Russian oil dependence. Let's start taking some very firm actions," she said during a "Fox and Friends" segment on Wednesday.

"Putin only understands strength and power and this administration has failed," she added.