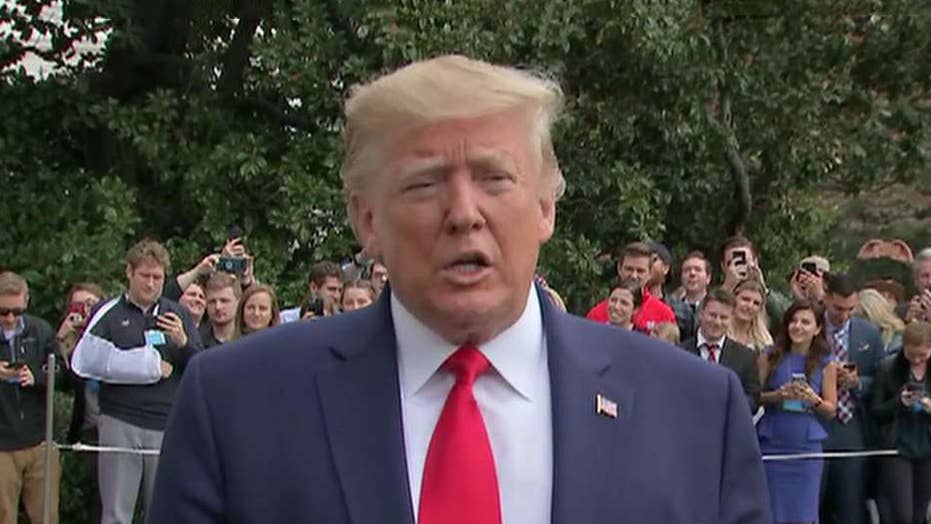 The president speaks out on new reports that the review into the Russia probe origins has become a criminal investigation; John Roberts reports from the White House.

MSNBC anchor Chuck Todd opened his show Friday by dismissing the latest developments in U.S. Attorney John Durham's criminal probe into the origins of the Russia investigation as something that is "largely" based on President Trump's "personal grievances and conspiracy theories."

It was confirmed Thursday night that Durham's ongoing investigation into possible wrongdoing by the Department of Justice had shifted into a criminal inquiry. Durham was appointed to investigate the Russia probe origins by Attorney General William Barr.

"Now we do not know when this criminal inquiry began and we do not know what actual crime is being investigated yet, but we do know that this is an inquiry the president has publicly demanded based largely, it seems, on some of the same personal grievances and conspiracy theories that have also fueled his interactions with Ukraine," Todd told his viewers.

He then shifted to what he described as the "biggest development."

"[What] we are now looking at, perhaps by the president's design, is a fog of political warfare involving him, his lawyer, his attorney general, the Justice Department and Congress," Todd said. "You have the president and [his personal attorney Rudy] Giuliani who schemed to get Ukraine to dig up dirt on their political rivals, some of which would get filtered to Barr. You have an impeachment inquiry into that scheme that's barrelling its way into Congress. You have the president now successfully getting Barr to criminally investigate the Justice Department via the origins of the Russia investigation. And you have the Justice Department scrutinizing Giuliani's ties to Ukraine after they arrested two of his associates who are involved in the Ukraine matter."

"Taken together, it's a circular firing squad of chaos with Ukraine as the connective tissue for all of it," Todd said.

The anchor went on to suggest that the "current state of American democracy" is a "mess" and that the U.S. government "appears to be coming apart at the seams."

"This is the news that honestly, we've been sort of expecting for some time or thinking that if things got really bad, it might come to this," Maddow told her viewers. "As of tonight, according to The New York Times, it has come to this."

The liberal opinion host also dismissed Durham's investigation, criticizing what she described as a "frame job" and a "false flag operation" of the Trump campaign.

"That is the conspiracy theory that the attorney general of the United States appears to have been going around the world trying to prove," Maddow said, later calling Durham's probe "embarrassing."