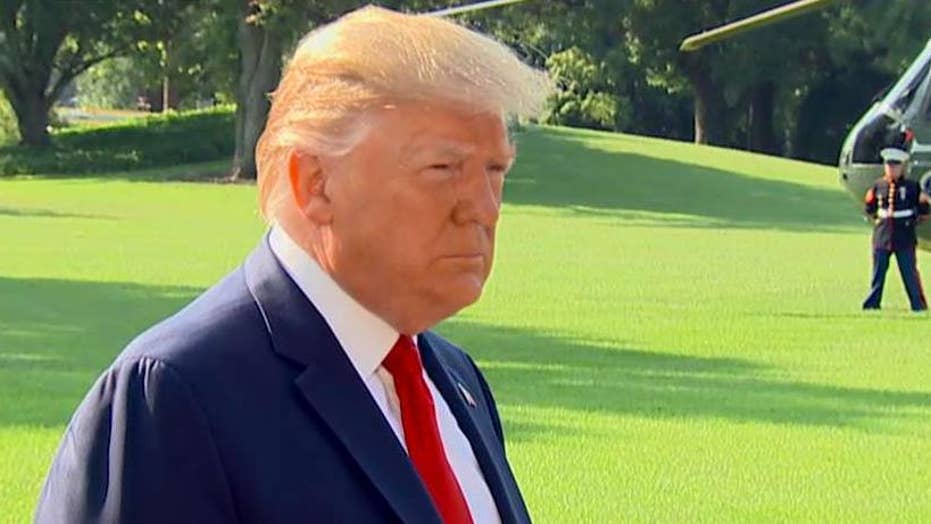 Trump makes remarks ahead of visit to Dayton, Ohio and El Paso, Texas

President Trump responds to questions from reporters about criticism of his rhetoric.

MSNBC anchor Brian Williams failed to push back Monday when NBC News contributor Frank Figliuzzi floated a bizarre theory that flags honoring victims of recent tragic mass shootings will be raised from half-mast on a specific date that could be seen by white supremacists as a nod to Adolf Hitler.

“The president said that we will fly our flags at half-mast until August 8, that’s 8/8. Now I’m not going to imply that he did this deliberately, but I am using it as an example of the ignorance of the adversary that’s being demonstrated by the White House,” said Figliuzzi, a former assistant FBI director.

“The numbers 8/8 are very significant in the neo-Nazi and the white supremacy movement. Why? Because the letter ‘H’ is the eighth letter of the alphabet, and to them, the numbers 8/8 stand for ‘Heil Hitler."

“So we’re going to be raising the flag back up at dusk on 8/8,” Figliuzzi added before expressing concern that White House aides didn’t put a stop to it.

Williams, who was famously removed from “NBC Nightly News” for embellishing tales of his reporting experience, didn’t question the bizarre theory.

“As chilling as that is to hear, you’re saying it is possible that someone who knows better is authoring or editing the words that show up and are read verbatim… by the president?” Williams asked.

Former “Nightly News” anchor Brian Williams was demoted to MSNBC after he was caught embellishing stories.

“I’m concerned about who is writing his script and his speeches,” Figliuzzi answered.

Williams then wrapped up the segment and declared that MSNBC will continue to invite Figliuzzi on air “to explain this stuff.”

Political satirist and “No Things Considered” host Tim Young told Fox News that it’s “scary to think that Williams was once one of the most trusted names in news” prior to his demotion to MSNBC.

“Now he's peddling insane, tinfoil hat conspiracy theories,” Young said. “What's even scarier is that there are clearly producers and news executives that see nothing wrong with sowing this type of disinformation and conspiracy.”

“Just when you think you've seen it all with the liberal media, they find a way to surprise you,” Houck told Fox News. ‘But then again, nothing is outside the imagination of Lyin' Brian Williams so of course Figliuzzi's craziness seemed totally plausible.”