Lisa Nelson calls for accountability after her son, Anthony, was attacked by a suspect who has more than 40 prior arrests.

The mother of a New York City transit worker who was brutally attacked said Thursday on "Fox & Friends" the suspect in the crime must receive a maximum prison sentence and be denied bail.

Lisa Nelson's son, Anthony Nelson, was attacked while he was working in a subway station. He was reportedly helping two women who were being harassed when the assailant attacked.

Nelson is now recovering at home, but his mother said he’s still in a lot of pain.

Lisa Nelson demanded accountability for the suspect, Alexander Wright, who has more than 40 prior arrests, with charges including second-degree assault, felony criminal mischief and assault as a hate crime.

"How can a man that has 40-something arrests be walking the street?" she asked, in an interview with Steve Doocy.

"He could have killed my son; or, if my son did not hold him down until the authorities got there, that man probably could have hurt somebody else."

Congressman Lee Zeldin is joined by elected officials as they demand the demand a repeal of the cashless bail law on Nov. 10, 2021 in Central Islip, New York. (Photo by Alejandra Villa Loarca/Newsday RM via Getty Images)

Nelson said she has never supported liberal bail reforms that have led to a soft-on-crime approach.

"Don't let them walk off with a year. No, because he's going to come out and do the same thing all over again," she said.

"We're pleading with the system to see things the way it should be and do the right thing: Up this bail, and also, let's give this guy the max," Kelley said. 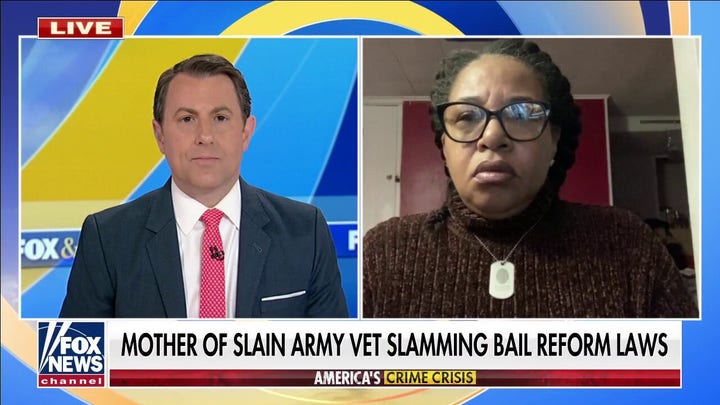 He said Anthony Nelson could be re-victimized with the low bail that could allow Wright to be back on the streets.

And while Lisa Nelson said she no longer feels safe in New York City, Kelley vowed to continue fighting until Wright is given the maximum sentence.