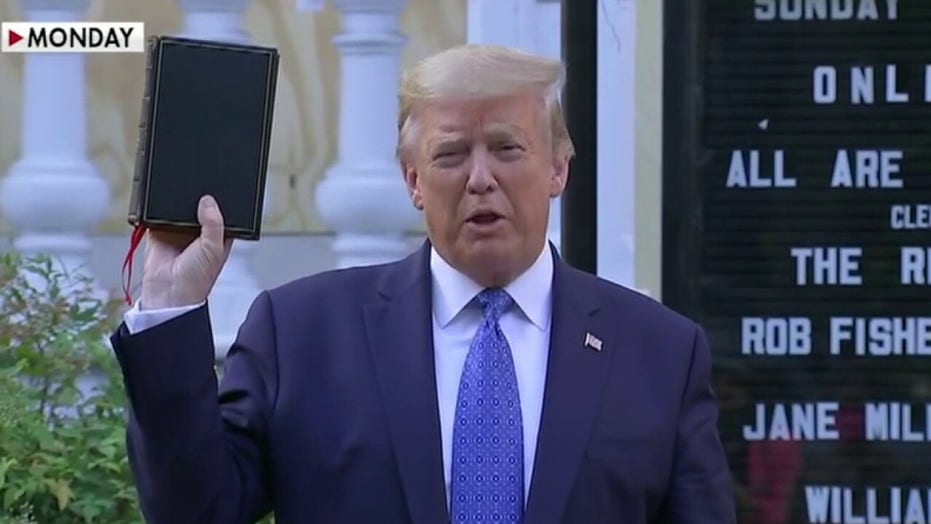 'It's not her church, it's not her bible.' Kellyanne Conway responds to criticism of President Trump for paying respect to St. John's church after an arson attack

Retired Navy Adm. Mike Mullen, a former chairman of the Joint Chiefs of Staff, accused President Trump Tuesday of disrespecting the right to protest and potentially politicizing the military.

"It sickened me yesterday to see security personnel — including members of the National Guard — forcibly and violently clear a path through Lafayette Square to accommodate the president's visit outside St. John's Church," wrote Mullen, who served as America's highest-ranking military officer from October 2007 through September 2011, in op-ed published on the Atlantic website

Mullen op-ed added his voice to a chorus of criticism Trump's Monday evening visit to the Episcopal church, which was preceded by law enforcement clearing protesters out from the area around Lafayette Park north of the White House.

Shortly before his visit, Trump gave remarks in which he argued, "we cannot allow the righteous cries and peaceful protesters to be drowned out by an angry mob."

To combat the violence, Trump threatened to send the military to cities which he determines to be  inadequately responding to riots -- invoking the Insurrection Act of 1807.

"I am not convinced that the conditions on our streets, as bad as they are, have risen to the level that justifies a heavy reliance on military troops," Mullen wrote. "Certainly, we have not crossed the threshold that would make it appropriate to invoke the provisions of the Insurrection Act.

"Furthermore, I am deeply worried that as they execute their orders, the members of our military will be co-opted for political purposes. Even in the midst of the carnage we are witnessing, we must endeavor to see American cities and towns as our homes and our neighborhoods. They are not 'battle spaces' to be dominated, and must never become so."

Trump has repeatedly criticized governors for not doing enough in response to rioting and looting. During a conference call on Monday, he described many governors as weak and ordered them to "dominate" the situations in their states.

On Tuesday, the U.S. Park Police released a statement claiming the protesters were committing acts of violence when they were cleared out Monday night.

"On Monday, June 1, the USPP worked with the United States Secret Service to have temporary fencing installed inside Lafayette Park.  At approximately 6:33 pm, violent protestors on H Street NW began throwing projectiles including bricks, frozen water bottles and caustic liquids. The protestors also climbed onto a historic building at the north end of Lafayette Park that was destroyed by arson days prior," read a statement from acting Chief Gregory T. Monahan.

"Intelligence had revealed calls for violence against the police, and officers found caches of glass bottles, baseball bats and metal poles hidden along the street.To curtail the violence that was underway, the USPP, following established policy, issued three warnings over a loudspeaker to alert demonstrators on H Street to evacuate the area. Horse mounted patrol, Civil Disturbance Units and additional personnel were used to clear the area. As many of the protestors became more combative, continued to throw projectiles, and attempted to grab officers’ weapons, officers then employed the use of smoke canisters and pepper balls. No tear gas was used by USPP officers or other assisting law enforcement partners to close the area at Lafayette Park. Subsequently, the fence was installed."