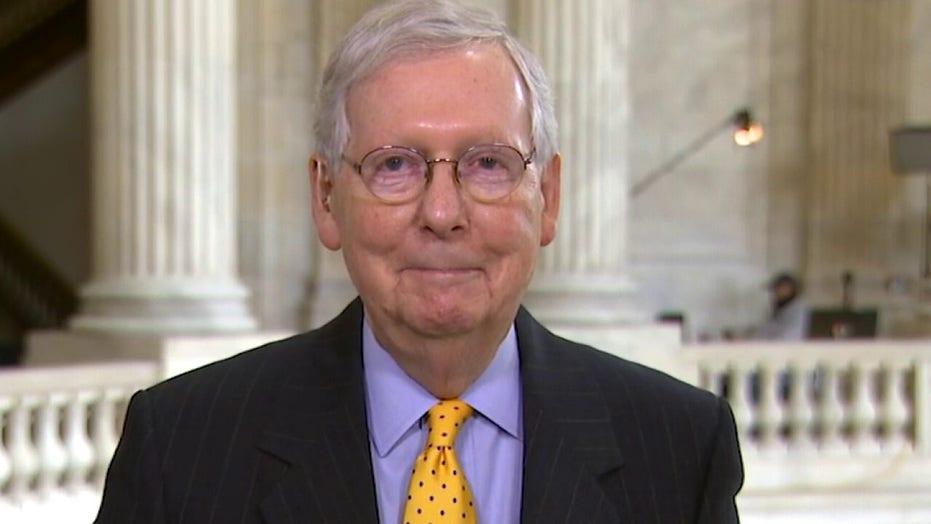 McConnell: We can't pay people more to not work, we need to incentivize them to find jobs

Senate Majority Leader Mitch McConnell, R-Ky., fired back at House Speaker Nancy Pelosi, D-Calif., on "The Story" Thursday after she criticized Senate Republicans for focusing on issues related to Hunter Biden and Ukraine while Democratic lawmakers push for another round of coronavirus legislation.

"I’d say to the speaker, after the impeachment, you are not in a position to be lecturing us about what the appropriate use of Senate time is," McConnell told host Martha MacCallum.

"If the House can spend time on a baseless impeachment effort," he argued, "then we should at least have oversight on what happened to initiate this whole process a couple of years ago."

On Wednesday, Pelosi accused Republicans of “political retribution” after the Senate Homeland Security Committee voted to approve a subpoena for a consulting firm linked to the Ukrainian natural gas firm Burisma Holdings as part of an investigation into Biden’s role on the board of the firm.

PELOSI RAMPS UP PRESSURE ON MCCONNELL TO PASS CORONAVIRUS LEGISLATION

"After the impeachment, you are not in a position to be lecturing us about what the appropriate use of Senate time is."

Meanwhile, Judiciary Committee Chairman Lindsey Graham, R-S.C., has announced his panel plans to vote on a subpoena authorization related to the FBI's apparent surveillance abuses in the Russia investigation.

“It is sad that the GOP Senate has meekly and weakly chosen to be complicit in the President’s desperate and dangerous political tactics instead of passing legislation to save lives and livelihoods,” Pelosi said in a statement.

"There was a lot of apparent misbehavior going on in the opening of those investigations, into General [Michael] Flynn and others," McConnell told MacCallum.

"So, [Sen.] Ron Johnson [R-Wis.], the head of [the] Homeland Security [Committe] has got subpoenas out for Hunter Biden, and Lindsey Graham the chairman of the Judiciary Committee has laid out a series of hearings and people he wants to call to come testify."