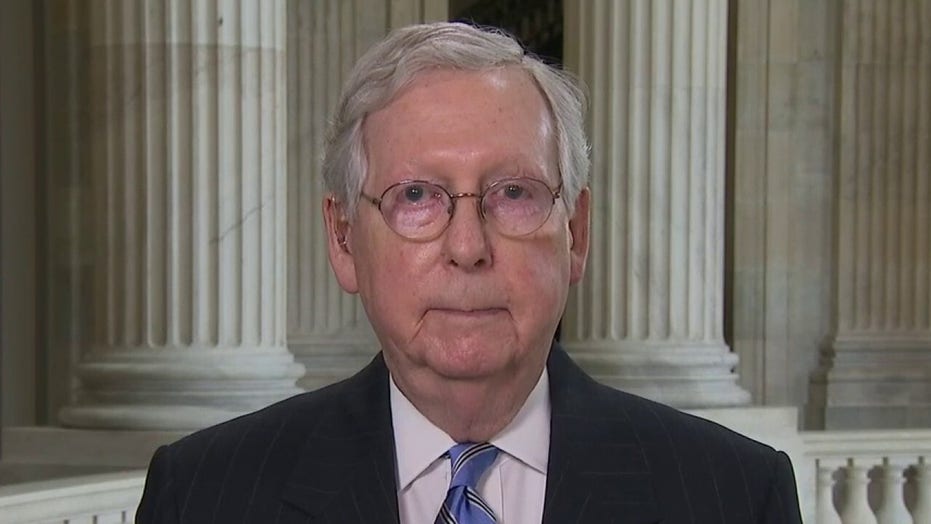 "The president and Senate Republicans are going to be in the same place. We will let you know when we think the time is right to begin to move again," McConnell said. "I think there's a high likelihood we'll do another bill."

House Speaker Nancy Pelosi acknowledged Thursday that the so-called HEROES Act faces long odds of becoming law, but suggested the massive bill could be a starting point for negotiations with the White House and Senate.

"We're putting our offer on the table, we're open to negotiation," Pelosi said. The House is set to vote on the measure Friday.

When Baier asked McConnell why he would not treat the Democratic proposal as a starting point for negotiation, the Kentuckian described it as a "liberal wish list" and "a parade of absurdities that can hardly be taken seriously."

Earlier in the interview, the Majority Leader emphasized that any further coronavirus aid bill would have to include liability protection for businesses and other organizations that resume operations amid the pandemic.

"Our red line is going to be liability protections for those who are brave enough to begin to open up the economy again in the wake of the trial lawyers who are descending already on hospitals and doctors and businesses as of about a week and a half ago," McConnell said.

"And people have to be brave enough to begin to engage in economic activity," he added. "How about the presidents of universities? Are they willing to open up for the fall or are we going to have another period of time where not only K through 12 students, but potentially college students are still at home? All of those questions need to be answered by the fall."

McConnell also admitted Thursday that he had misspoke earlier this week when he claimed that the Obama administration "did not leave to this administration any kind of game plan for something like this."

"I was wrong, they did leave behind a plan. So I clearly made a mistake in that regard," McConnell said. "As to whether or not the plan was followed, who's the critic and all the rest, I don't have any observation about that because I don't know enough about the details of that, Bret, to comment on it in any detail."