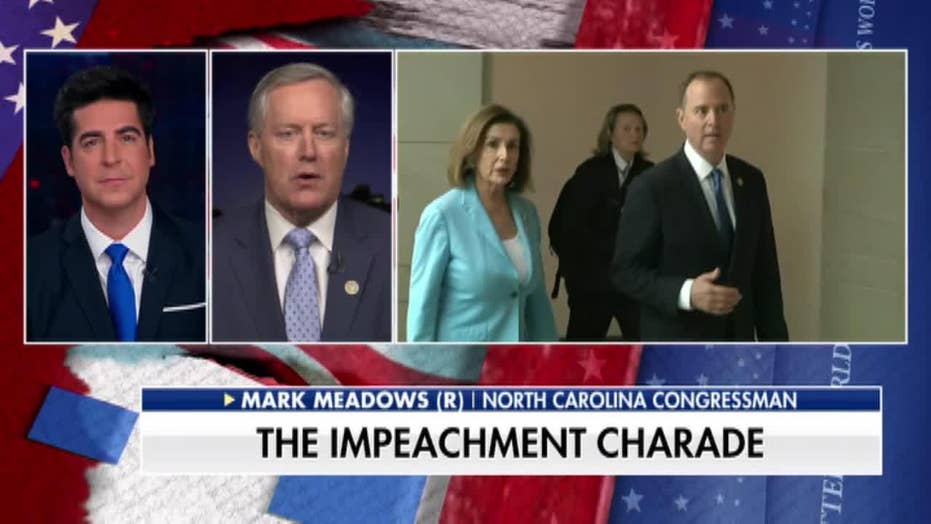 House Freedom Caucus member Mark Meadows, R-N.C., said Democrats wearing black clothing in the wake of President Trump's impeachment are continuing with their "public relations stunt" to make Americans believe they are saddened to have taken such drastic action.

In an interview airing Saturday on "Watters' World," Meadows told host Jesse Watters that behind their facade of solemnity, most House Democrats are "high-fiving" and celebrating what they see as a great political achievement.

However, the western North Carolina lawmaker said only the most progressive Democrats should feel safe celebrating in public.

"A lot of the Democrats were wearing black to try to put on this PR stunt as if it was a somber mood," he said. "They’re putting on black, because for a lot of them, this is their political funeral."

"I can tell you, they’re high-fiving in the hallways," he added.

Meadows said Senate Majority Leader Mitch McConnell, R-Ky., will not simply follow orders from House Speaker Nancy Pelosi, D-Calif., on how to run a potential impeachment trial. Pelosi has yet to formally forward the two adopted articles of impeachment to the Senate to begin with.

"This is nothing more than a political stunt," Meadows said, adding that besides those lawmakers in deep blue districts, the rest of the Democratic caucus is "very scared."

Meadows also discussed reports that he is leaving Congress in the coming months after representing the Great Smoky Mountains region since 2013 -- after former Washington Redskins quarterback and Democratic Rep. Heath Shuler himself retired.

"We're going to get Donald Trump reelected and I'm all-in for that," he added.