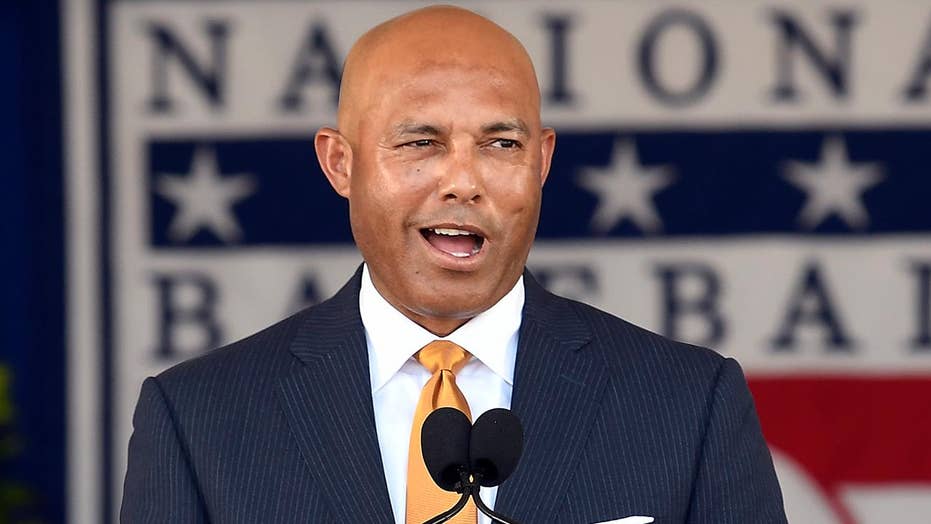 The Yankees pitching legend and first player to be unanimously voted into the Hall of Fame is ripped by The Daily Beast for supporting Israel.

The Daily Beast was widely mocked for publishing a “disgusting smear piece” against New York Yankees legend and committed Christian Mariano Rivera that billed him as “far right” on the day he was inducted into the baseball Hall of Fame.

The article, “Inside baseball Hall of Famer Mariano Rivera’s far-right politics,” was written by Robert Silverman, who has recent history of far-left sports-related columns. It was published on Sunday, hours before Rivera's incredible career was honored.

“For countless fans, Rivera is baseball royalty — an idol, worshipped for his on-field dominance, deadly mastery of a cut fastball, and pinpoint control… And over the past three years, he’s also served at the pleasure of a racist president, taken part in thinly veiled propaganda on behalf of a far-right government in Israel, and gotten chummy with outright bigots and apocalyptic loons,” Silverman wrote.

Silverman then mixed an assortment of compliments and praise for the baseball icon with hacks at his Christian faith and support of Israel, which has included various trips and charitable work.

“While there, Rivera said the [Israel Defense Forces] trains soldiers to be ‘a better person, a better citizen, and a better human being,’ according to a statement put out by the FIDF. Two-and-a-half months earlier, Israeli soldiers killed at least 60 Palestinian protesters in Gaza and injured thousands more,” Silverman wrote.

“The excursion went so well, David Friedman, the U.S. ambassador to Israel who once described J Street, a Jewish lobbying group that has endorsed a two-state solution, as ‘worse than Kapos,’ proudly tweeted a photo shaking hands with Rivera.”

"It was bad enough to run a hit piece on Mariano Rivera on the day of his induction into the Hall of Fame. It was much worse to lace the coverage with anti-Israel and anti-Trump invective, and to use a featured image of Rivera standing on a pitching mound made of a 'kippah' made from an Israeli flag."

The column seemingly vilifies the Yankees legend for allegedly praising a military that once killed people, while also taking issue with him shaking an ambassador's hand.

Since it was published, the piece hasn't gone over all that well.

The Daily Beast has even been accused of editing the column’s headline and image after backlash. The original image apparently featured Rivera standing on a mound atop an Israeli flag, but The Daily Beast did not respond when asked to confirm a change was made.

Cornell Law School professor William A. Jacobson told Fox News that “there seems to be no bottom” for liberal The Daily Beast.

"It was bad enough to run a hit piece on Mariano Rivera on the day of his induction into the Hall of Fame. It was much worse to lace the coverage with anti-Israel and anti-Trump invective, and to use a featured image of Rivera standing on a pitching mound made of a 'kippah' made from an Israeli flag,” Jacobson said.

The Daily Beast did not immediately respond to a request for comment.

“Readers are informed that over the course of his career, Rivera kept his political beliefs private (this is painted as sinister secrecy), but now that he's retired, his ‘far-right’ leanings are coming to light.  And what do those views entail?  He's a Christian who loves Israel,” Benson wrote.

"As a Christian, I do believe that the Lord gave us the Bible. The Bible speaks about Israel. Everything – from New Testament, Old Testament – it’s all about Israel and the relationship his people have."

Rivera, a 13-time All-Star, is considered by many to be the greatest closer in the history of baseball and was the sport’s first player unanimously voted into the Hall of Fame. He helped lead the Yankees to five World Series titles, picked up the 1999 World Series MVP, holds just about every postseason pitching record, and is Major League Baseball’s all-time saves leader with 652.

But Silverman was determined to take a swing at him for political and religious views on the day he received baseball's highest honor.

“As to why Rivera’s right-wing politics remained a secret for so long, it’s partially a function of the era in which he played, and partly due to his conscious efforts to keep this information about his private life under wraps,” the author wrote. “Little in-depth coverage of Rivera and Israel exists outside of the Israeli media and a few right-wing blogs.”

Earlier this month, Rivera told the Washington Examiner that he’s a big supporter of Israel and explained how his Christian faith helped him develop a deep connection to the Jewish state.

“As a Christian, I do believe that the Lord gave us the Bible,” Rivera told the newspaper. “The Bible speaks about Israel. Everything – from New Testament, Old Testament – it’s all about Israel and the relationship his people have.

"So as a Christian, I understand that the chosen people of God is Israel — Jewish Israel. The country was made by him. All the other countries were made by men. This country was built by him for his people.”

Mariano Rivera waves to the crowd on Sept. 26, 2013 at the Yankee Stadium. (Getty Images)

The Daily Beast column was bashed across social media and ridiculed by conservatives.

“It's pathetic that a man of faith, universally admired by those who've followed his amazing career, is targeted in this hit piece over his Christian faith, biblical beliefs and his support for Israel. This was a shameful, craven attack by Silverman, one designed to besmirch Rivera on the very day of his enshrinement at Cooperstown. But it's not surprising in a time when sports media glorify radical leftists like Colin Kaepernick and Megan Rapinoe,” Media Research Center contributing writer Jay Maxson wrote.