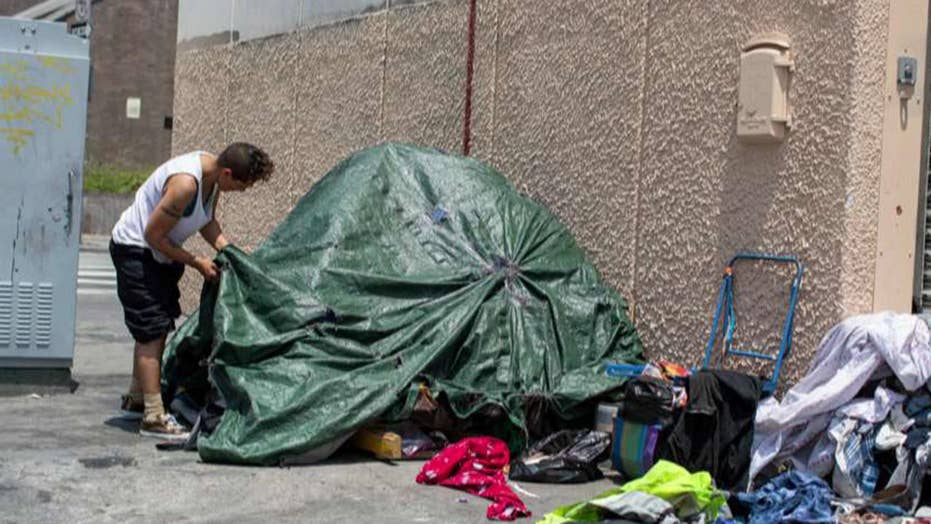 This summer Fox News embarked on a project to chronicle the toll that progressive policies have taken on four West Coast cities: Seattle, San Francisco, Los Angeles and Portland, Ore.

Most of the cities have thrown hundreds of millions of dollars at the problem of homelessness -- only to watch it grow worse.

Bongino said decades of monopolistic Democratic rule is a large part of the problem.

“The reality of liberalism … liberalism is a cancer, it’s a forest fire, it destroys everything it touches,” he said.

“Liberalism is a cancer, it’s a forest fire, it destroys everything it touches.”

In May, San Francisco officials braced themselves when a preliminary homeless count was released. They expected the numbers to rise and they were right. Initial data showed the figure had jumped 17 percent from 2017. The double-digit growth was bad enough but then it got a whole lot worse.

When the final report was released a couple of months later, it showed the increase would have been 30 percent if the city had stuck to the same definition of homelessness as it had in the past. This year, San Francisco city officials opted to use the federal definition instead of the one they wrote themselves.

The U.S. Department of Housing and Urban Development's definition of homelessness includes people who are living on the streets, in cars or in shelters. San Francisco's own definition widens the category to people without a permanent address who are in prison, rehab or hospitalized. If the city used the same measurement it had in years past, the numbers would show an increase from 7,400 to 9,784 -- or 30 percent -- in 2019.

Though homeless encampments are popping up on freeways and underpasses, the largest concentration of L.A.'s unsheltered population calls Skid Row home. The downtown neighborhood, memorialized in the film "The Little Shop of Horrors" as the last resort for winos and junkies has long been a dumping ground for hospitals, prisons and other cities and states looking to offload their homeless.

Today, the roughly 50-block district just east of downtown is a dystopian panorama of human misery, where vacant-eyed residents shuffle in and out of their makeshift shelters, navigating around broken wheelchairs, discarded syringes, garbage and human waste. The unsanitary conditions have turned it into a veritable petri dish of disease that's ripe for rodent infestation.

He agreed that Democrats aren’t good for cities.

“They don’t know what to do,” he said about their leadership skills, adding: “They are reelected by rote, by reflex.”