The Dow dropped again like a rock, gas prices are heading back up, recession is a certainty, which means layoffs are coming, and we’re edging closer to a direct war with Russia… Can you guess who Biden’s blaming?

Laura Ingraham discussed how President Biden should have left things on "autopilot" and opened what was closed after the pandemic, but instead he instituted destructive economic policies on "The Ingraham Angle."

LAURA INGRAHAM: When Biden came into office, the economic headwinds, Ron [Klain], were at the backs of all of you, all you had to do after you were given the vaccine and all this huge consumer demand. Red states had already been open for several months. All you needed to do was to keep things on autopilot. Just open up whatever was closed, get people back to work, turn off the spending spigot. You had it made in the shade. Instead, Biden did his stupid 100 days of masking. Remember that?

LAURA INGRAHAM: THE AMERICAN PEOPLE ARE FACING A LONG PERIOD OF DECLINE AND DESPAIR

That, of course, extended far beyond that. And of course, the White House issued harmful vaccine mandates against federal contractors, federal workers. We ended up having a pilot shortage, health care worker shortage. Then there's the federal workers who just never came back. And now we have a frightening decline in our military recruiting, also tied in part to Biden's vax mandate. So Biden and his team of fanatics have crashed this economy with all sorts of other really important spillover effects. 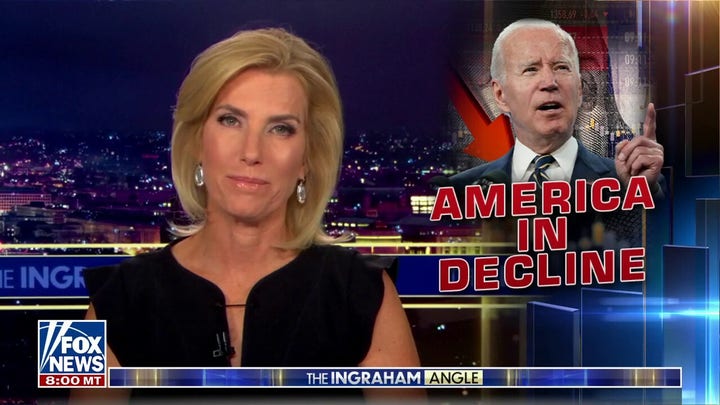