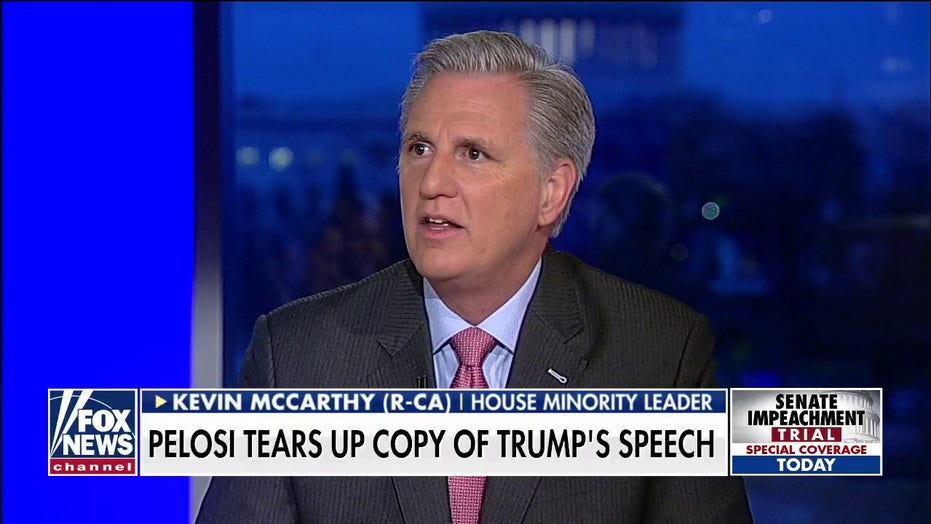 “I don’t know what it says to the 13-year-old grandson that dreams of serving this country, [who] watched his father break barriers by being one of the Tuskegee Airmen — his 100-year-old grandfather stands up, and she rips that up? That’s not who we are and we’re better than that,” McCarthy told “Fox & Friends.”

“She’s in line after the vice president to become president and that’s the way she’s acting?”

Pelosi ostensibly tore her printed copy of the speech immediately as the president wrapped up his remarks on Tuesday night.

“When I sit in the floor and I been in a lot of meetings that are private with the speaker and the president and others, we could’ve had DACA done but that was the attitude the Speaker had when we were dealing with that,” McCarthy said.

When Fox News asked her afterward why she did it, she responded: "Because it was the courteous thing to do considering the alternatives." She added: "I tore it up. I was trying to find one page with truth on it. I couldn't."

On the heels of an impeachment trial, which is expected to end in an acquittal on Wednesday, tension was palpable between Pelosi and Trump. The president apparently "snubbed" the speaker when she tried to shake his hand as he handed printed copies of his address to her and to Vice President Mike Pence.